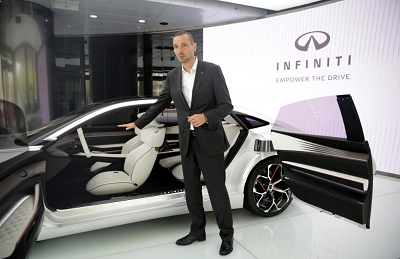 That means Infiniti will aim to boost sales in the world's biggest vehicle market to about 150,000 vehicles a year, up from 48,000 last year, the brand's global chief Roland Krueger said in an interview.

Premium cars account for about 12 percent of the US market and 30 percent in Germany, Krueger said.

Combined with the "dynamic and fast" development of new-energy vehicles in China and "there is a huge growth potential in China for us," he said.

Krueger said that from 2021, every Infiniti model launched will be either an all-electric car or an "e-Power" hybrid, underlining Nissan's previously announced plan to make Infiniti primarily an electrified offering.

More than half of Infiniti's global sales will be electric vehicles by 2025, he said.

Sales of NEVs in China, excluding commercial vehicles, totaled 460,000 to 470,000 last year, according to Infiniti.

Within the next five years, Infiniti will be producing six models locally in China.

In addition to the QX50 sport utility vehicle, Infiniti has been producing the Q50-L, a long-wheelbase version of the Q50, in China since 2014. At the Beijing auto show starting next week, Infiniti is expected to display a concept car called the Q Inspiration. Krueger said the brand plans to produce a car based on this concept car, an e-Power hybrid, over the next five years.

Combining localization and electrification, "we want to triple our volume within the next five years at a minimum," Krueger said.

It also marks an effort to elevate the brand's image in the way Tesla has done, producing a highly desired premium brand lineup of electric cars.

In China, Audi, BMW and Mercedes-Benz have dominated the premium auto market for much of the past two decades. But as Chinese consumers' appetite for upscale cars grows, the market has seen a sizable uptick in competition with automakers - from Cadillac to Lexus to Acura to Lincoln and Tesla - investing in their brands to gain market share.

"Customer preferences are changing fast. We have data showing that from 2011 to 2016, interest in EVs among Chinese customers tripled," Krueger said.