BUSINESS No easy fix for car-makers

No easy fix for car-makers 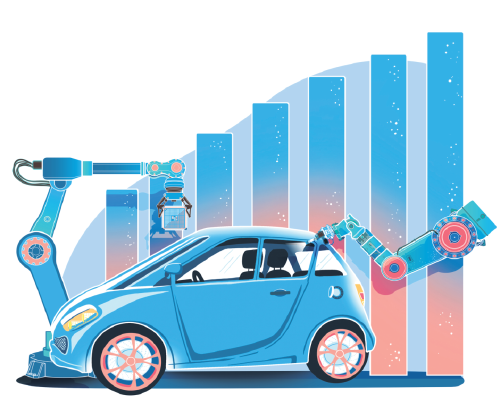 In May 2017, sales forecasts for passenger vehicles in China were guardedly optimistic. Car unit sales were projected to grow 12 percent until 2020, and 22 percent until 2023. In addition to volume growth, there was a further expectation of consumption upgrading, continued vehicle sophistication, added features and higher price points. Supported by these forecasts, the automotive industry added capacity and investments.

But the automotive value chain was already under transformational pressure. For manufacturers, there was the demand for ever-increasing emission reductions. Manufacturers were also beginning to face the shift to mobility services－the mobility-as-a-service logic－threatening the profitable direct consumer connection. For suppliers, technology shifts were looming; autonomous driving, new energy powertrains and digitalization. These technologies all incur additional R&D expenses with only limited payback to date. The distribution networks that were built across the country over the expansive growth period have also taken on significant investments and debt.

In 2019, there was already a reduction of unit sales compared to those in 2018. But in 2020, because of the novel coronavirus outbreak, the automotive sector has taken an especially hard hit. Sales in the first quarter were down by almost half compared to 2019. Thus, the local automobile industry is grappling with a new reality and short-term struggles.

As today the automotive industry is deemed a critical part of China's industrial development, it is no surprise that both central and local governments have issued new and revised supporting policies in March and April.

A recent critical policy change relates to auto finance. Financial institutions are now encouraged to increase lending for new cars, reduce the down payment requirements, reduce interest rates, and extend repayment periods. If implemented by banks and auto-finance institutions, these should encourage purchases.

China's stage 6 vehicle emission standards, the latest of this kind, were planned for full implementation on July 1. This was a tough target for the industry, especially in terms of clearing the inventory of the stage 5 vehicles. The sales drop in the first quarter effectively eliminated the possibility for inventory reduction of the stage 5 vehicles. On April 9, a first policy change was introduced allowing cities and provinces not already converted to China stage 6 to continue selling inventory vehicles past the June 30 deadline. On April 28, this was further enhanced by delaying the full stage 6 implementation altogether until year-end. This policy allows for dealerships to avoid fire-sale prices and for manufacturers and suppliers to deplete parts inventory for stage 5 models.

While the overall car sales slumped in the first quarter, it is worth noting that customer sentiment differs across segments. The premium market share increased from 13 percent to 16 percent. Many of the largest premium brands did not suffer nearly as much as the overall market. Mercedes-Benz, Audi, BMW and Volvo all were "only" down 20 percent to 30 percent. Thus, it is not surprising that the new energy vehicle subsidy program has a new price-ceiling. This quickly prompted Tesla in late April to reduce the price of the Model 3 to just below the ceiling. Overall it is very likely that consumers will add further price pressure across all segments as they consider their buying options.

Also at the provincial and city levels, several policy measures are being added. Some 25 cities have added local purchasing subsidies for both NEVs and gasoline cars. These subsidies are often tied to locally produced vehicles and will support the local economy and drive demand. Additional examples of local policy are Shanghai's and Hangzhou's expansion of the number of available license-plates for 2020.

All in all, the government's support measures demonstrate a focus on the continued strategic transformation of the automotive sector. That is, further promoting the move from combustion engines to NEVs. Whether directly in extending the NEV-subsidy program, eliminating the purchase tax for NEVs, or local moves to add subsides for scrapping China's stage 4 vehicles. All these measures support the transformation and will continue to strengthen the domestic industry by international comparison and increase the NEVs domestic market share.

With these new and revised policies, we now expect 2020 to improve significantly compared to the earlier worst-case forecasts. Our current modeling lands at a most likely net loss of between 8 percent and 12 percent in units. With limited price cuts, this is a level the industry should be able to sustain for 2020.

In conclusion, the announced April policy updates will support the most urgent needs of the automotive industry. However, the policies will not fundamentally alter the three long-term challenges: innovation, cost and demand.

First, the automotive industry is grappling with how to handle the shift from ownership to mobility. Without controlling more of the end-user spending in mobility, the traditional automotive industry stands to lose approximately one-third of its profit pool. This is not a policy issue, but rather a challenge to the manufacturers.

Second, the sector still has structural overcapacity. There are similarities to the state of the overall European automotive industry in 2008-10; that is, the industry received various government support to alleviate short-term stress. However, without addressing the structural cost, several manufacturers continued to suffer from a poor cost-position for the next decade. Today－behind closed doors－automotive executives in China agree that many weaker companies will go through a "slow suffocating death", unless decisive actions are taken.

Third, the decision to buy a car is still the single largest expense for most households. That decision will indeed, in the short term, be supported by subsidies and price cuts. However, the actual buying decision will continue to be heavily dependent on the individual consumer's optimism about their economic future. For that optimism, the automotive industry will rely on the continued success of the Chinese government and enterprises to continue to create and spread prosperity across the broader population.