BUSINESS No need for panic over rising inflation pressure in China, stimulus to follow: analysts

No need for panic over rising inflation pressure in China, stimulus to follow: analysts 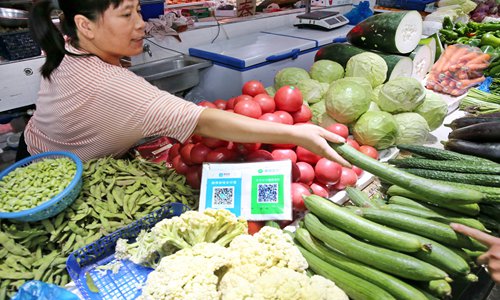 China's consumer inflation picked up slightly more than expected in August while producer prices saw slower growth, but both gauges are rising at a stable rate and there are no major inflation risks, despite the challenging domestic and global outlook, analysts said on Monday.While the rising trend in consumer prices and the cooling growth in producer prices point to downward pressure on the world's second-largest economy, analysts said that potential risks are still under control as remedial policies will help ease the effects of slowing growth and an ongoing trade war with the US.China's consumer price index (CPI) rose 2.3 percent year-on-year in August, compared with 2.1 percent in July, while the producer price index (PPI) grew by 4.1 percent year-on-year, 0.5 percentage points slower than in July, according to data released by the National Bureau of Statistics (NBS) on Monday.Although the CPI picked up and the PPI cooled more than expected, both are still within a stable range, according to Li Daxiao, chief economist at Shenzhen-based Yingda Securities, who attributed the faster increase in consumer inflation to seasonal factors."The faster growth in the CPI was mostly boosted by rising food prices in recent weeks because of weather and other seasonal factors," Li told the Global Times on Monday. "There are no signs of major inflation pressure."Food prices rose 2.4 percent month-on-month in August, compared to 0.1 percent in the previous month, according to the NBS. Specifically, vegetable prices rose 9 percent month-on-month because of high temperatures and the rainy season and pork prices also grew by 6.5 percent from July due to the outbreak of African swine fever in certain areas, said Sheng Guoqing, a statistician at the NBS said on Monday.While PPI, a key gauge of industrial profitability, cooled significantly in August, Li said the rate is still within the "normal" range because producer prices have been rising at a fast pace for a while. "So to cool down a little bit from such a fast pace is normal," he said.No cause for panicLiu Xuezhi, senior analyst at Bank of Communications, added while both indexes might show some inflationary pressure in China, there is no need for panic because policymakers are taking various measures to deal with it."There is going to be some inflationary pressure, but it will be within policymakers' expectations as they take more measures to ease the situation," he told the Global Times, adding that China will probably maintain sufficient liquidity and use expansionary fiscal policies to spur growth. China has been injecting money into the market through open market operations and has been encouraging lending to keep sufficient liquidity, while also approving more infrastructure projects worth tens of billions of dollars to keep demand up, according to Li. "I expect these efforts will continue, and may intensify," he said.However, there are uncertainties as China and the US are engaged in an escalating trade war that is unlikely to end in the near future, analysts said. The world's two largest economies have slapped tariffs on $50 billion worth of each other's goods, with the US threatening to impose tariffs on all imports from China."So far, the trade war has not had a major impact on the Chinese economy. But if the US goes ahead with its threats, there will be some pressure," Li said. "It's just that there is so much uncertainty now."He noted that China might need to prepare more countermeasures to minimize the impact of the trade war on domestic economic growth, such as direct help for companies affected.