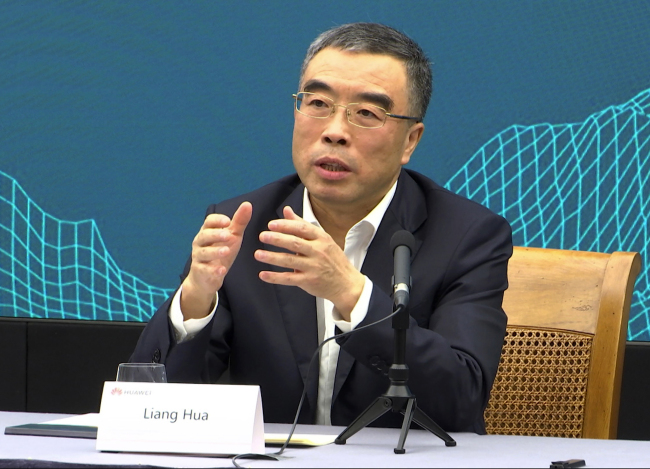 Liang Hua, Huawei's chairman, speaks at a press conference at the company's headquarters in Shenzhen on Friday, July 12, 2019. (Photo: IC)

Liang Hua, chairman of Huawei, called the trading restrictions imposed by the United States government unjust and groundless. Speaking at a press conference in Shenzhen on Friday, Liang called on the United States to remove Huawei from its export control list, as the trade restrictions were also harming the company's business partners in America.

China's Ministry of Commerce has also urged the Trump administration to fulfill its commitment to easing the trade restrictions on the company as soon as possible.

During the G20 summit in Osaka, Trump promised to allow some sales to be made to Huawei by firms in the United States, adding that the company would remain on the export control list until the trade conflict with Beijing has ended.

Revenue growth despite US curbs

Despite the trade restrictions, Huawei has seen revenue growth during the first half of this year, said Liang. The company's financial results are due out at the end of this month.

Huawei says it is committed to independently developing chips and other critical technologies in order to cut its reliance upon imports. It has spent about $73 billion on research and development over the past decade.

On the company's Hong Meng operating system, Liang said that it is being developed for use in telecommunications gear and low-latency applications like self-driving vehicles. He said the company is still prioritizing the use of Google's Android operating system, but if that becomes unavailable because of the trade restrictions, Huawei may consider developing it further for use in mobile phones.