BUSINESS No timetable is set for return of service by Boeing 737 Max: CAAC

No timetable is set for return of service by Boeing 737 Max: CAAC 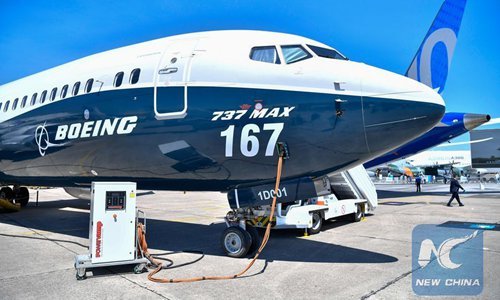 China's aviation regulator said on Thursday that there's still no timetable for the return to service for the Boeing 737 MAX, and it will not consider approving the aircraft until there is a clear investigation outcome from the two tragic accidents associated with the plane.

The Civil Aviation Administration of China (CAAC) said that the aircraft will need to regain its airworthiness certification and have pilots thoroughly trained before the plane can return to service. The US Federal Aviation Administration revoked Boeing's authority to issue airworthiness certificates to new 737 MAX airplanes manufactured since the grounding in 2019, and said it will perform in-person individual reviews of the aircraft.

Earlier this year, Boeing said that it had made "significant progress" in support of safely returning the aircraft to service, including a series of software and training updates. The CEO of The Boeing Co has twice consulted with the CAAC on the plane's return to service, according to Feng Zhenglin, head of the CAAC.

According to media reports, Boeing is now close to winning back authority to issue airworthiness certifications to fly in the US, and American Airline Group plans to return the Boeing 737 MAX to service as early as the end of this year, the company said earlier this week.

"We have zero tolerance for any safety hazards," Feng said. "As long as [the aircraft] meets the three requirements, we are happy to see it back in service."

China was the first to ground the Boeing 737 MAX after two fatal crashes of the aircraft in 2018 and 2019 that killed 346 people. It is also the country that has suspended the most flights involving the 737 MAX-8.

In October 2018, Lion Air flight 610 dove into the sea after taking off from Jakarta, Indonesia, killing 189 people. Less than six months later, in May 2019, another 157 people were killed when flight 301 of Ethiopian Airlines crashed. So far the investigations of the crashes in Indonesia and Ethiopia have blamed faulty sensors and control systems.

The accidents have been a huge blow to Boeing's finances and reputation. At the beginning of this year, the company reported only 380 commercial airplane deliveries in 2019, the lowest since 2007, in stark contract with its rival Airbus, which delivered 786 planes.

In the latest monthly record, Boeing lost another three orders for the 737 MAX planes, and delivered only 11 total aircraft.

"This is an additional blow to Boeing on top of the hit from the coronavirus pandemic, which has led to increasing cancellation of aircraft orders," Qi Qi, an aviation industry watcher, told the Global Times.

"It will take a long time before the world accepts the model again, and all eyes will be on its safety record after resuming service in the US," Qi said.