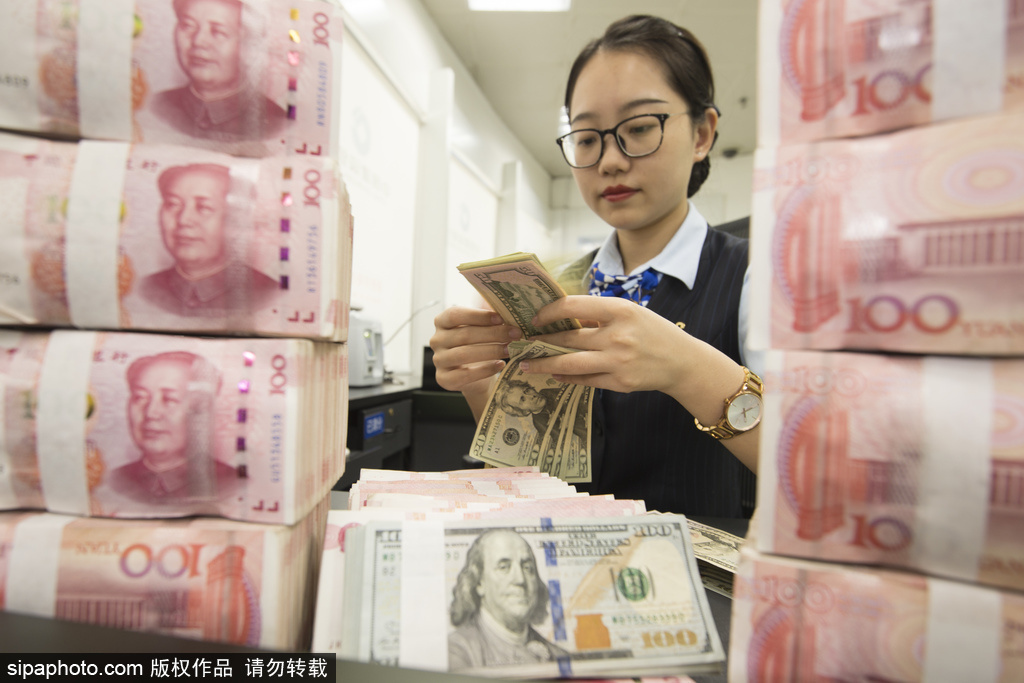 A bank staff counts RMB and US dollar notes in a bank in Nantong, Jiangsu province on Aug 6, 2019. (Photo: Sipa)

China plans to significantly lower the threshold for foreign investors' strategic investment in listed companies to introduce more overseas capital and practical management experience as part of the overall efforts to improve the governance structure of listed firms, the Ministry of Commerce said in an online statement on Thursday.

The ministry and other government branches, including the China Securities Regulatory Commission, have made 29 draft amendments to the existing Measures for Strategic Investment by Foreign Investors in Listed Companies, such as clarifying the application scope, lowering investment threshold and increasing investment channels in the A-share market, and have actively solicited public opinion on the draft revised rules.

In the A-share market, shares are denominated in renminbi and traded on the Shanghai and Shenzhen stock exchanges.

If China's Securities Law and related regulations demand a longer term lockup period, the requirements for foreign investors to carry out strategic investment through the targeted issuance of new shares by listed companies shall be removed from such provisions. It would reduce the shareholding requirement for strategic investments from 10 percent to 5 percent via transfer agreements, according to the draft of revised rules.

The document said if the strategic investment is explicitly made by means of a tender offer, the proportion of the shares of the listed company to be purchased shall not be less than 5 percent of the shares already issued.

With China pushing a new round of reform and opening-up, including continuing to cut the items on the negative list and announcing the master plan for the Hainan Free Trade Port, its capital market will be more open toward the rest of the world and welcome quality overseas financial institutions and long-term investors to operate and invest in China, said Chen Wenling, chief economist at the Beijing-based China Center for International Economic Exchanges.

Therefore, both domestic and foreign players will share the benefits of the long-term stability of China's economic development, she said, adding the country's financial opening-up measures closely relate to its efforts to make the capital market more supportive of the real economy.

The ministry said that foreign direct investment in the nonfinancial sector fell by 3.8 percent year-on-year in China to 355.18 billion yuan ($51.21 billion) during the first five months of this year.

However, the country saw a 7.5-percent growth in FDI on a yearly basis to 68.63 billion yuan in May, showing global companies' confidence in the country had continued to soar despite the COVID-19 pandemic.

Peter Tyroller, member of the board of management of Robert Bosch GmbH responsible for the Asia-Pacific region, said that although the outbreak has had a significant effect on the global economy and companies, the German company remains convinced about the potential of the Chinese market.

As Bosch has invested 48.5 billion yuan in China's manufacturing and innovation sectors over the past decade, he said the company will make every effort to ensure sustained and stable supplies to meet increasing demand from the Chinese market as the company seeks to tap into development opportunities and spur its future growth in China.

Global capital flows into China's high-tech industries grew by 2 percent on a yearly basis between January and May, said Gao Feng, spokesman of the commerce ministry.

The investment in China by economies related to the Belt and Road Initiative rose by 6 percent year-on-year and that of the Association of Southeast Asian Nations by 10.1 percent in the first five months, according to the ministry.