BUSINESS Not very merry: US stocks plunge before Christmas

Not very merry: US stocks plunge before Christmas 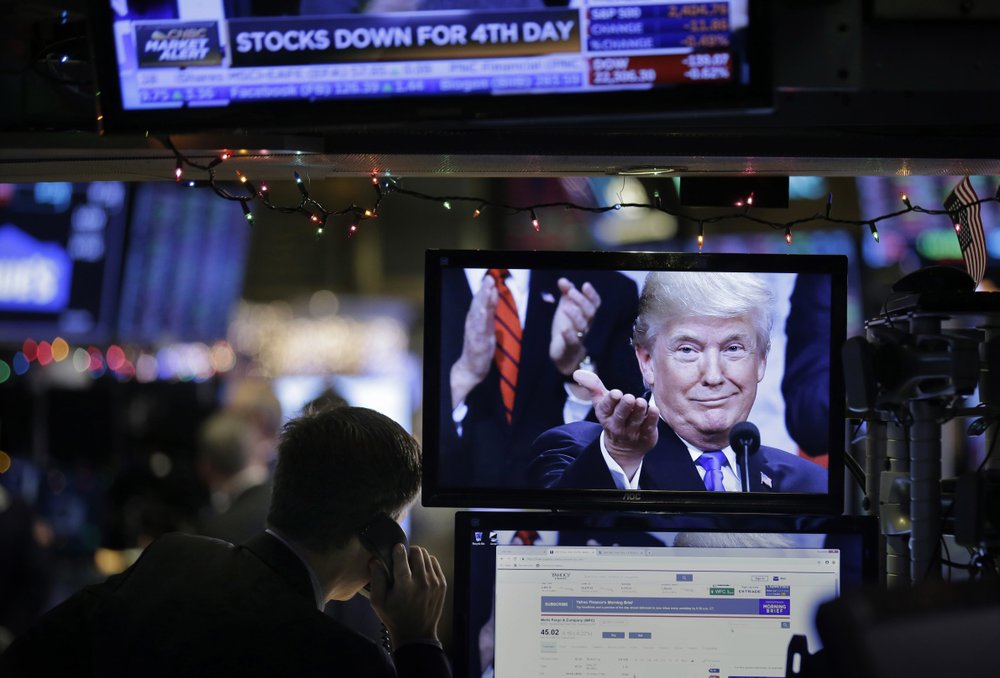 A picture of President Donald Trump is displayed on a computer on the floor of the New York Stock Exchange in New York, Monday, Dec. 24, 2018. (Photo: AP）

President Donald Trump’s attack on the Federal Reserve spooked financial markets on Christmas Eve, raising fears about an uncertain future should the White House try to undermine or remove the head of the US central bank.

Treasury Secretary Steven Mnuchin calls to the top executives at six major banks Sunday in an attempt to stabilize jittery markets had the opposite effect.

The major indexes on Wall Street fell another 2 percent Monday, making it very possible that the market will end this month as the worst December for stocks since 1931.

The past two trading days, however, have been dominated by something else: major losses immediately following tweets from the president criticizing Fed Chairman Jerome Powell and the central bank, which sets monetary policy for the nation.

Trump’s morning tweet blasting the Fed generated fears about the economy being destabilized by any efforts to undermine Powell or strip him of office.

Fed board members are nominated by the president, but they’ve historically made decisions independent of the White House in order to shield decisions about employment and inflation from political maneuvering. Trump has voiced his anger over the Fed’s decision to raise its key short-term rate four times this year. Those measures are intended to prevent the economy from overheating at a time of brisk growth and an unemployment rate near a half-century low.

Trump’s latest remarks, which came after administration officials spent the weekend trying to reassure financial markets that Powell’s job as Fed chairman is safe, created more uncertainty for already unnerved investors that have seen all of the stock market gains from this year evaporate.

“Now we’re having a correction and we’re down for the year, so the narrative people get drawn to is that perhaps (Trump’s) more unpredictable policies are bad for the market,” said Craig Birk, chief investment officer at Personal Capital. “The separation between the president and the Fed, maybe just causes a little more concern than it would have a few months ago.”

Monday’s sell-off extends the market’s losses after its worst week I more than seven years. The major indexes are down 16 to 26 percent from their autumn highs.

Trading was choppy and volume was light Monday during a shortened trading session ahead of the Christmas holiday Tuesday. U.S. markets are due to reopen for trading on Wednesday.

Technology stocks, health care companies and banks took some of the heaviest losses in the sell-off, which began following news that the Mnuchin called CEOs of six major banks Sunday in an apparent attempt to stabilize jittery markets.

Mnuchin said the heads of Bank of America, Citigroup, Goldman Sachs, JP Morgan Chase, Morgan Stanley and Wells Fargo all assured him they have ample money to finance their normal operations, even though there haven’t been any serious liquidity concerns rattling the market. But the calls added to the underlying worries that have gripped markets of late.

The market briefly bounced back from the steep opening slide, then veered lower again around midmorning after Trump tweeted his latest volley of criticism at the Fed, which included: “The Fed is like a powerful golfer who can’t score because he has no touch - he can’t putt!”

Health care and technology stocks accounted for a big share of the selling Monday. Microsoft fell 2.2 percent to $96.05. Johnson & Johnson lost 4 percent to $122.99.

Oil prices, which have sunk on concerns about the state of the global economy and also oversupply in the market, continued to slide. Benchmark U.S. crude fell 3.1 percent to $44.18 a barrel in New York. Brent crude, used to price international oils, declined 2.6 percent to $52.43 a barrel in London.

The decline in oil prices weighed on energy stocks. Hess slumped 8.1 percent to $38.11.