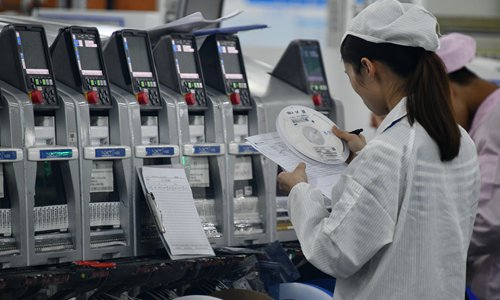 A worker assembles intelligent terminal products on a production line in a factory in Zunyi, Southwest China's Guizhou Province in November.  (Photo: IC)

Uncertainty, unstable external demand and seasonal reasons are behind the weaker-than-expected November trade data, Chinese experts said on Sunday. China should continue its efforts to improve the quality of its trade to be more resilient and balanced, they agreed.The November imports and exports data were released by the General Administration of Customs (GAC) on Saturday. The annual growth rate for exports in November stood at 5.4 percent with imports at 3 percent, falling short of analysts' expectations by a wide margin.According to a Reuters poll last week, analysts gave a 10 percent forecast for November exports growth and 14.5 percent for imports.The nation's overall trade maintained stable growth and the January-November trade figure exceeded the whole-year figure for 2017.Globally, China's 14.8 annual trade growth in the first 11 months still runs ahead of WTO's 2018 forecast of 3.9 percent.The November trade data followed China and the US agreeing on December 1 to a 90-day truce to reduce trade tensions.On a year-to-year basis, exports growth to the US, EU, and South Korea all slowed in November, Reuters reported. The trade truce might have messed with market expectations, Chinese experts noted. Hints of a coming truce and a more stable renminbi exchange rate in November may have eased the urgency among firms to beat the tariffs by "front-loading," Zhao Ping, director of the department of international trade research at the China Council for the Promotion of International Trade, told the Global Times on Sunday.There were also specific country reasons, Zhao noted. "Japan, for instance, saw its demand fade when an eight-quarter-long recovery, the longest since the 1990s, ended in the third quarter," Zhao said.Policy boost Zhao was cautiously optimistic about China's trade growth next year, predicting that China will safeguard its status as the world's largest goods trading nation against the US, the previous holder of that status.China was expected to stick to policies aimed at boosting quality of growth, Zhao said, with more opening-up measures and reduced institutional costs for companies.In 2019 Chinese companies would "face more pressure from uncertainties than from difficulties," Zhao said. "Uncertainties are beyond control and there is a possibility that the US, for internal reasons, will demand an increasingly hard bargain in its negotiations."Bai Ming, a research fellow at the Chinese Academy of International Trade and Economic Cooperation in Beijing, said China's efforts to improve trade would be less about volume and more about quality in 2019, seeking to boost buyers' preference for Chinese products.Beijing should increase support in new markets such as those along the routes of the Belt and Road initiative, Bai told the Global Times on Sunday.The US still accounts for 13.7 percent of China's foreign trade. "The goal of restructuring trade is to make the US less important to China," Bai said.In renminbi terms, BRI markets accounted for 27.3 percent of China's total foreign trade during the first 11 months of 2018, according to GAC, an increase of 0.8 percentage points."China can import more goods from countries that are willing to invest and build advanced industrial plants in China," he said.Cong Yi, a Tianjin-based professor of economics, told the Global Times on Sunday that China should introduce more measures to incorporate the goal of boosting exports into its overseas investment drive."This would combine China's strengths as an infrastructure superpower and a manufacturing house for machines and equipment to bring synergy," Cong said.