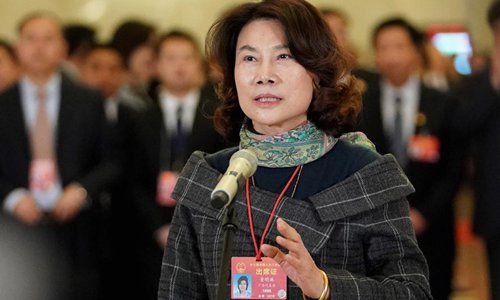 Dong Mingzhu, a deputy to the 13th National People's Congress (NPC), receives an interview before the second plenary meeting of the second session of the 13th NPC in Beijing, capital of China, March 8, 2019. File (Photo:Xinhua)

The female entrepreneur, famous for her tough style, noted that Chinese enterprises have developed their own technologies and China should roll out its own standards, which may be higher than the US and international standards.

China has released relatively complete standard systems in the field of household electric appliances which have developed for over three decades, Ding Shaojiang, a veteran industry analyst, noted.

"Using international standards is conducive for domestic enterprises to promoting their products in the global markets and promoting Chinese brands," Ding told the Global Times.

Chinese enterprises like Gree are eager for the establishment of Chinese own standards reflecting some Chinese companies command world-leading technologies that surpass international standards and desire to leap for a higher valued section in the industry chain.

Ding also pointed out that the lack of market standards for some advanced household electric appliances, including intelligent products, is not an exclusive problem in China but a question for the world.

Chinese household electric appliance industry are world leading and it's beneficial if Chinese giants like Gree and Haier could promote the perfection of relevant criteria domestically and then globally, by popularizing their technology norms.

Gree has about 90,000 employees, among which over 14,000 are technology developing staff, accounting for 15.56%, according to its first half-year financial report in 2020. Dong aims to foster Gree's research base in Zhuhai into an international research center. To attract talents, Dong disclosed that Gree will distribute 3700 suits of departments to technical staff this year staff can be rewarded with residential property if they worked at Gree until their retirement.

China's standardization administration of household electric appliances has set up 431 standards in regulating and supervising the household appliance market, according to a report released by State Administration for Market Regulation in March, 2020.