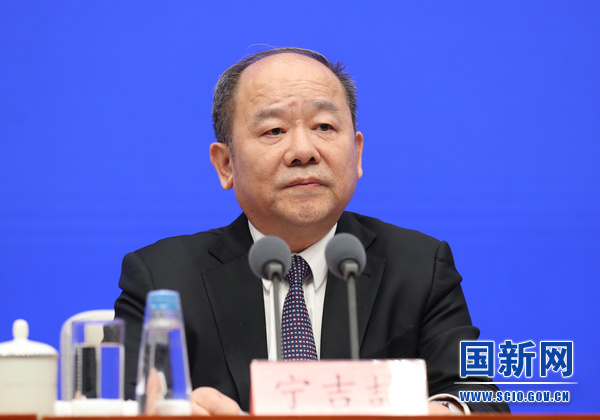 China will continue attracting foreign investment to its advanced manufacturing and high-tech sectors this year, offering new business opportunities for global stakeholders to participate in its next-stage, high-quality development paradigm as mapped out by the country's new five-year development plan, officials and analysts said.

The country will encourage foreign investment participation in the development of China's high-end manufacturing industry, new infrastructure construction and innovation-driven development, according to the country's top economic regulator.

"This year, the fifth group of major foreign-funded projects will be launched (in China), backed by supportive policies in terms of industrial planning, land use, environmental assessment and energy use," Ning said at a State Council Information Office news conference on Monday.

Against the backdrop of a sharp decline in global cross-border direct investment, China has seen significant growth in the actual utilization of foreign capital, with nonfinancial foreign direct investment for 2020 jumping 4.5 percent year-on-year to $144.4 billion, according to the National Bureau of Statistics.

In January this year, China made a good start in the use of foreign capital, which rose by 6.2 percent year-on-year and totaled $13.5 billion for the month.

"Foreign-funded enterprises have maintained stable operation and production in China. Having coped well with the epidemic impact, a number of major foreign-funded projects are pressing ahead steadily," Ning added.

A white paper by the American Chamber of Commerce in South China said 94 percent of member companies based in the United States said they were optimistic toward 2021's business outlook in China. Also, China remained the top investment destination of more than half of the surveyed companies.

Experts said China's ongoing efforts to boost foreign investment are in line with the draft Outline for the 14th Five-Year Plan (2021-25) for Economic and Social Development and Long-Range Objectives Through the Year 2035, which says China has vowed to unswervingly open its economy wider and expand institutional opening-up in the coming five years.

Citing specific opening measures outlined by the 2021 Government Work Report, Cheng Shi, chief economist at ICBC International, said the government is pursuing expanding opening-up at a larger scale and at a deeper level.

"China is seeking all-around cooperation and long-term exchanges," Cheng said. "China's economic and financial openness highlights both consensus on sentiments and values and mutual benefits and win-win outcomes. It will be committed to promoting the building of the community with a shared future for mankind and expanding opening-up at higher levels."

To facilitate the establishment of an open economy at a higher level in 2021, the NDRC said it will further shorten the negative lists for foreign investment access, advance orderly opening-up in the services sector, open more industries to foreign investment, fully implement the system for post-establishment national treatment and better resolve issues foreign companies face in investment, production and operation.

China has revised negative lists for foreign investment market access for four consecutive years, from 2017 to 2020, and the number of items on the lists has been reduced by nearly two-thirds, officials said.

"Against the backdrop of rising protectionism, China's intensified efforts to shorten the negative lists have shown the country's firm determination to deepen reforms and expand opening-up at a higher level, which will help foster high-quality development for the long run," said Pang Chaoran, a researcher at the Chinese Academy of International Trade and Economic Cooperation.

Pang said more efforts should also be made to further relax market access in fields such as services.

German specialty chemical firm Covestro is eyeing rising growth opportunities in the China market, saying it will set up its global headquarters for engineering plastics in Shanghai as a new business unit.

"China is the biggest market for Covestro's engineering plastics," said Holly Lei, president of Covestro China. "More decisions will be made from Shanghai, and more global headquarters of our business units may be established here as the Chinese market continues to grow."