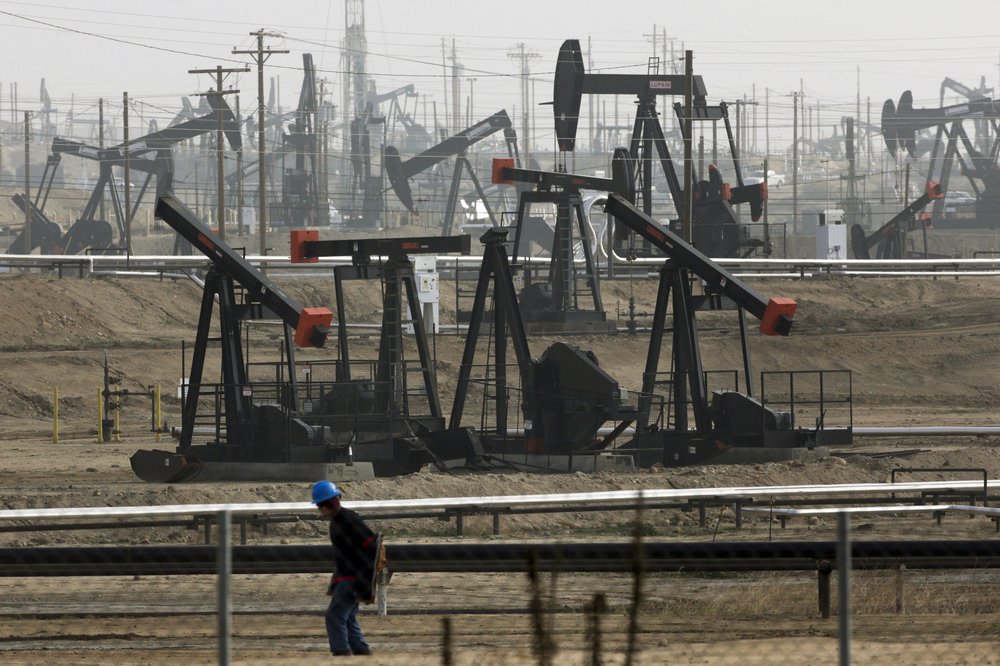 This Jan. 16, 2015, file photo shows pumpjacks operating at the Kern River Oil Field in Bakersfield, Calif., which is overseen by the US Bureau of Land Management. (Photo: AP)

The production figure was up 122 million barrels, or more than 13% from 2018. It includes oil from onshore and offshore parcels and American Indian-owned lands managed by the US Interior Department during fiscal year 2019, which ended Sept. 30, federal officials said.

Critics charge that the gains being made by energy companies come at the expense of the environment, with fewer safeguards to protect the land and wildlife from harm.

“You have to create an environment where folks want to bid on leases and then go develop them,” Hammond said. “One thing we can do as regulators is give people some assurances we’re going to work through the process in a fair and efficient way.”

He said permits were being issued to companies more quickly without compromising the landscape and public waters.

The steep rise in production in recent years follows the advent of a drilling technique known as hydraulic fracturing, or “fracking,” which lets companies extract oil from underground reserves that were once considered out of reach.

Fracking spurred an industry boom during the Obama administration that has picked up speed under Trump.

About one-quarter of US oil is produced from federal lands, a figure that’s held fairly steady for much of the last decade as drilling has increased on both public and private lands.

There’s been longstanding strong demand among private companies to acquire oil and gas leases on lands controlled by the US Bureau of Land Management, said Mike Penfold, a retired state director at the agency.

What’s different under Trump, he said, is the rollback of environmental rules intended to strike a balance between development and conservation.

“This is another example of the Trump administration undoing four or five decades of thoughtful laws to protect the public lands,” Penfold said. “The benefits of this go to the oligarchs who put more money in their pockets — not other public land users or the taxpayers.”

The amount of oil now coming from federal lands has broader geopolitical significance, giving the US a large enough stake in the world oil market to prevent the OPEC oil cartel from setting crude prices, said Sarp Ozkan, director of energy analysis at the industry data firm Enverus.

But Ozkan warned the pace of growth is likely to slow as companies shift from investing money into drilling to making sure their shareholders get adequate returns.

“That will undoubtedly affect production from (Department of Interior) lands as well,” Ozkan said.

Under Trump, the time it takes the Bureau of Land Management to approve drilling applications has been cut from 257 days on average in 2016, to 108 days last year, according to federal officials.

Royalties collected by the government on oil production increased to $7.5 billion in 2019, according to Interior officials. That’s up 21% from the prior year but beneath record revenues in 2013 when oil prices topped $90 a barrel.

Roughly half of that money is returned to states where the oil is produced. The rest goes into the US treasury.

Royalties on oil produced from Indian reservations or Indian-owned land areis returned to the tribes or individual owners.