BUSINESS Oil giants stay in their own backyards in US auction

Oil giants stay in their own backyards in US auction 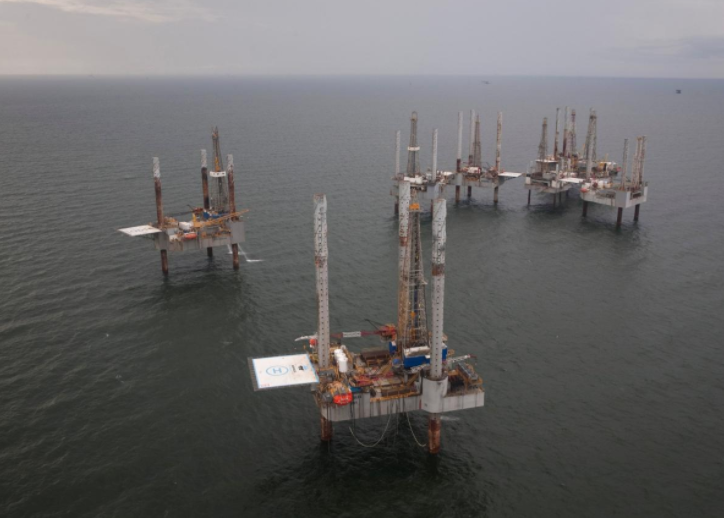 The Trump administration heralded the government’s sale last month of US drilling leases in the Gulf of Mexico as a bellwether.

If that is the case, a Reuters analysis of the sale’s results shows reason to worry about demand in future offshore auctions.

The sale brought in $124.8 million, as just 1 percent of the 77 million acres (31.2 million hectares) offered found bidders. Reuters examined the acreage offered and leased, and nearly all the purchases show big drillers stuck closest to existing infrastructure, shunning the most far-flung areas.

While US crude oil production reached a record last year at more than 10 million barrels a day, most new development is in onshore shale regions. The US Interior Department has said it wants to open all US coasts for drilling, including the Atlantic and Pacific. But the Gulf result indicates limited interest even in already-developed areas, never mind unexplored coasts.

The March auction included 9,088 deepwater blocks, each comprising roughly nine square miles. Only 105 of these blocks received bids and all but three of these were close to existing infrastructure and leases.

“It kind of looks like they’re just shoring up their existing prospects right now,” said John Filostrat, a spokesman for the US Bureau of Ocean Energy Management, the division of Interior that manages the auctions. Filostrat said the administration is still optimistic about future auctions and believes more auctions are needed to show the current trends.

For a graphic on Gulf of Mexico auction, click here

However, money for exploration is increasingly flocking to other regions, particularly Latin America, where energy reforms have attracted billions of dollars in investment from companies historically known as Gulf heavyweights. A January auction by Mexico brought in more than four times the bids as the US sale.

Of the 105 new US leases in water depths of more than 656 feet (200 meters), 85 were immediately contiguous with existing leased acreage or production platforms, and another 17 were within about two miles of existing leases or infrastructure, according to the Reuters analysis.

Among the areas where companies submitted bids were Mississippi Canyon and Green Canyon, two of the most densely leased plays in the Gulf, about 100 miles (160 km) off the Louisiana coast. Royal Dutch Shell Plc was the high bidder on two Mississippi Canyon blocks.

Overall, Shell picked up 16 Gulf blocks including 6 adjacent to its deepwater developments known as Kakias and Stones, and 10 clustered around other actively leased areas. It told Reuters that it wanted to “acquire blocks that could potentially support future development using our existing hubs.”

BP Plc’s most notable bids were 19 blocks in DeSoto Canyon, contiguous to a known gas field, about 100 miles from the Louisiana coast. “BP is strategic with its bids, and we use the opportunity to expand and strengthen our plays,” a company spokesman told Reuters.

Only three blocks leased were more than a few miles from existing acreage. Those blocks were snapped up by Chevron, which declined comment.

Bidding on parcels close to known assets increases the likelihood of finds that can be produced affordably, cutting infrastructure and supply costs.

“There’s still interest, but it is in areas where there was already existing knowledge of the resource base, or existing development activity or existing production,” said Michael Cohen, director of commodity research at Barclays.

“Spending a lot of money to prospect is probably not going to be looked upon with favor by investors,” he said.

Deepwater offshore blocks currently require an 18.75 percent payment to the US government, compared with 12.5 percent for shallower areas and onshore drilling. An Interior Department panel in February recommended lowering those rates.

“It is something to look for in the August sale, possibly,” said BOEM’s Filostrat.

Companies have also expressed a desire for longer leases to more effectively drill in unexplored areas further from the coasts. Six deepwater regions more than 200 miles off the Louisiana coast received no bids at all. The water here is generally about two miles deep. The locale makes both drilling and transporting oil to shore especially costly.

The high cost of building underwater pipelines is another deterrent. Deepwater projects like Chevron’s Jack and St. Malo fields, more than 200 miles from the coast, required a pipeline connecting them to existing Gulf infrastructure closer to shore, approved in 2010, during a boom when US crude traded at about $90 a barrel.

Oil prices have rebounded from 2016’s lows at less than $30 a barrel, but the industry is still “in a bit of a wait and see mode,” said William Turner, a senior research analyst in Houston for Wood Mackenzie.