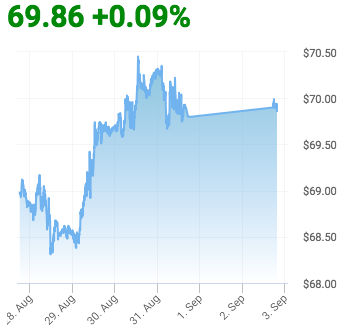 The price of West Texas Intermediate (WTI) and Brent for October delivery increased by 1.6 percent and 2.1 percent, respectively. WTI settled at 69.80 U.S. dollars and Brent settled at 77.42 dollars on Friday.

Oil prices started the week with slight gains with the news emphasizing the impact of the U.S. sanctions that is approaching towards Iran. The exports of crude oil from Iran have already been declining and the market was concerned with a potential supply deficit starting from November when the U.S. sanctions targeting Iran come into effect.

On Wednesday, U.S. Energy Information Administration (EIA) reported a draw of 2.56 million barrels in commercial crude oil inventories. The market was expecting a draw of 700,000 barrels which was much smaller than the actual report.

U.S. Imports of oil maintained the same level in the week ending Aug. 24 compared with the reported level of previous week. Meanwhile, U.S. net imports of oil decreased by 657,00 barrels per day during the week.

Moreover, EIA reported a draw of 837,000 barrels in distillates inventories. The market, however, was expecting a build of 1.6 million barrels.

EIA also reported a draw of 1.55 million barrels in total gasoline inventories rather than the market's expectation of a build of 400,000 barrels.

Draws in the crude oil, gasoline and distillates inventories were all seen as bullish factors to the oil prices. And the increase in U.S. exports of oil supported the bullish sentiment further.

On Wednesday, the bullish inventories report was also supported by the global supply worries due to the upcoming U.S. sanctions against Iran. WTI and Brent prices took significant gains and increased by 1.42 percent and 1.62 percent, respectively.

On Friday, the Houston-based oilfield services company Baker Hughes reported that the number of active drilling oil and gas rigs in the United States increased by 4 to 1048.

Furthermore, U.S. Dollar Index maintained its level around 95, down from 97 levels in a couple of weeks.

U.S. Dollar Index is a measure of the value of the dollar relative to a basket of foreign currencies. Oil is mostly traded in U.S. dollars all over the world and a stronger dollar pressures the oil demand.

On Friday, the trade talks between the United States and China ending in a standoff and slight increase in U.S. active drilling rig count dragged oil prices down. WTI and Brent prices decreased by 0.37 percent and 0.10 percent, respectively.

The price differential between WTI and Brent contracts of October widened further during the week. The differential was 7.62 dollars at the end of Friday.

Analysts also pointed out the widening gap between WTI and Brent can support U.S. oil exports in the future. The higher differentials between the two major benchmarks are, the more arbitrage opportunities for traders to pursue. As a result, more U.S. crude oil would be shipped to Asian market.

The oil market has been concerned with the ongoing global trade disputes as it might slow down the economic growth across the world, especially the growth of Chinese economy. The Chinese oil demand growth has been the main driver of the increasing world oil demand.

The oil market will keep a close look at how inventory levels will be next week with lower crude oil inputs to refineries as the high gasoline demand season ended in the United States.

Matthew Smith, the director of commodity research at ClipperData in Houston, U.S. state of Texas, told Xinhua that "oil prices in the U.S. will likely find some support next Wednesday from the weekly EIA report. A new month also means a renewed bout of economic data, with crude prices setting to take their cues from Nonfarm payrolls - official monthly U.S. jobs figures - released next Friday."

He said, "A new month will also bring refreshed estimates of OPEC monthly production. Based on a bounce in their exports, Libyan production has likely rebounded - the same appears to be true for Iraq. Meanwhile, the drop in Iranian exports should be reflected in lower output from the Persian state."