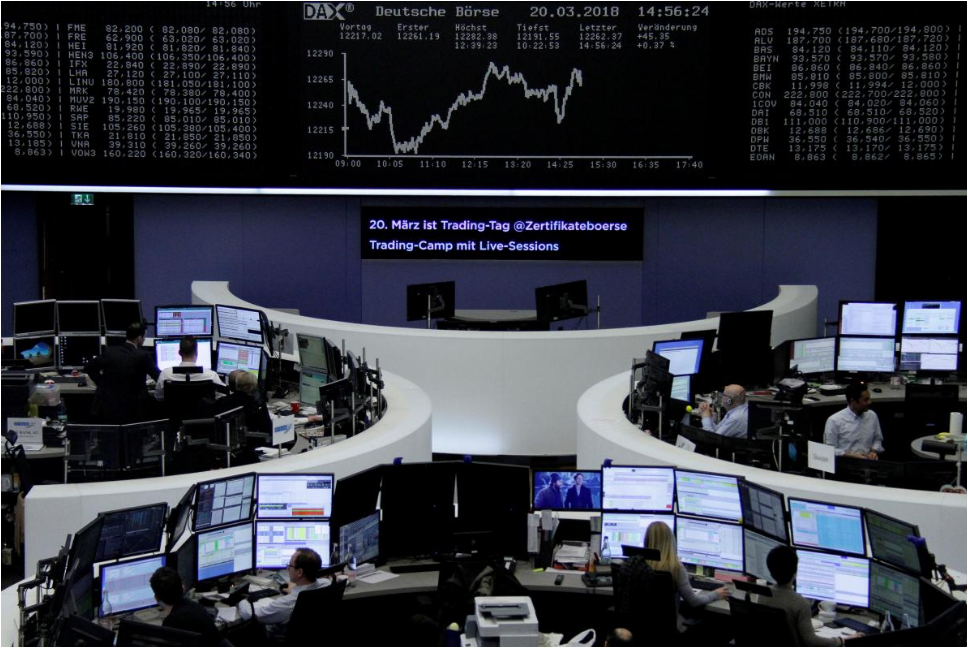 The German share price index, DAX board, is seen at the stock exchange in Frankfurt, Germany, March 20, 2018. (Photo: Reuters)

Oil prices rallied on Monday after Israel Prime Minister Benjamin Netanyahu said Iran had lied about pursuing nuclear weapons after signing a 2015 deal with global powers, while global stock indexes dipped with the S&P 500 led down by losses in technology.

Netanyahu said Iran had continued to preserve and expand its nuclear weapons knowledge after the deal.

US President Donald Trump has until May 12 to decide whether to restore sanctions on Iran that were lifted after the 2015 agreement over its nuclear program.

“The immediate worry would be that the Trump administration ditches the Iran deal, causing oil prices to go up... but the bigger (issue) is - would it lead to a larger confrontation militarily in the Mideast,” said Bruce Bittles, chief investment strategist at Robert W. Baird & Co in Sarasota, Florida.

In the US equity market, top tech names including Microsoft Corp  were among the biggest weights on the S&P 500.

Earnings and deal news provided some support. Starting off another busy week for first-quarter earnings, McDonald Corp’s reported a better-than-expected rise in sales and its shares jumped 4.3 percent. Apple Inc is set to report on Tuesday.

“The market doesn’t have a lot of upside momentum going. It rallies for a day or two but it just doesn’t follow through, and that’s been the case since the January-February correction,” Bittles said.

The pan-European FTSEurofirst 300 index .FTEU3 rose 0.21 percent. The MSCI global stock index was on track for a gain for April, its first positive month since January.

In the US bond market, the US Treasury yield curve flattened for a third straight session after US economic data missed expectations.

The yield gap between US 5-year notes and US 30-year bonds narrowed to 27.20 basis points US5US30=TWEB, the lowest spread in more than six years.

Weaker-than-expected German data hurt the euro against the US dollar.

The Federal Reserve is also due to meet this week, and while no rate hike in benchmark US interest rates is expected, investors will look for clues on the future pace of increases.

For Reuters Live Markets blog on European and UK stock markets open a news window on Reuters Eikon by pressing F9 and type in ‘Live Markets’ in the search bar.