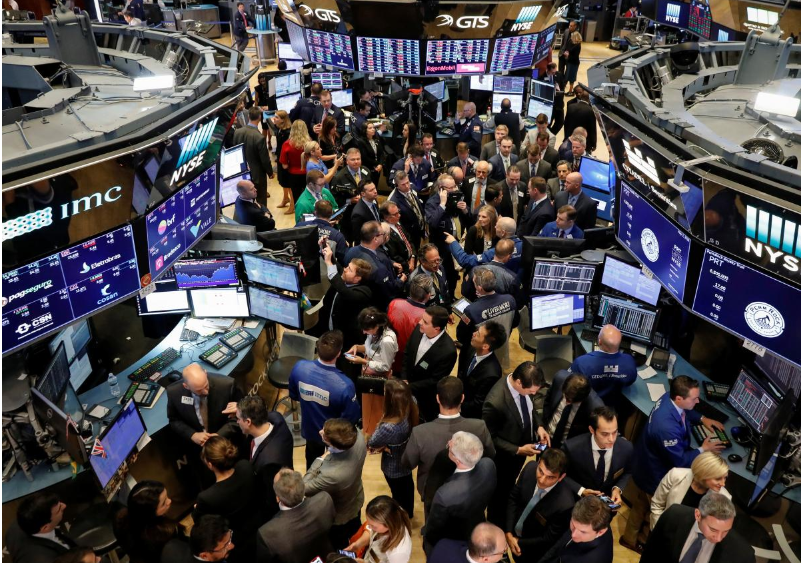 Traders and guests gather for the IPO of PermRock Royalty Trust on the floor of the New York Stock Exchange (NYSE) in New York, U.S., May 2, 2018 (Photo: Reuters)

A surge in energy and industrial shares kept Wall Street’s losses in check on Thursday, even as a rise in U.S. bond yields to a fresh seven-year high suggested more competition for equities.

The energy sector jumped 1.31 percent, giving the benchmark S&P 500 the biggest boost, as Brent crude LCOc1 touched $80 per barrel for the first time since November 2014. [O/R]

The Russell 2000 index hit a record high for the second session in a row as small-cap companies continued to outperform.

Latest data showed the number of Americans on unemployment rolls last week fell to the lowest since 1973. Other data showed a pickup in factory activity in the mid-Atlantic region this month, with manufacturers saying they were asking for higher prices for their products.

The combination of a tightening labor market and firming inflation supports expectations the Federal Reserve will raise interest rates next month.

The industrial sector .SPLRCI was up 0.6 percent, the second-biggest gainer among the 11 major S&P sectors.

“You have kind of a mixed bag of earnings numbers ... the economic data generally speaking was pretty good and that’s leading to a little bit of mild buying in the market,” said Paul Nolte, portfolio manager at Kingsview Asset Management in Chicago.

On the Russell 2000, Nolte said, “I think you’re starting to see people come into that because it’s the only index that has put in a new high and you’ve got some interest.”

The three rate-sensitive sectors, including real-estate .SPLRCR and utilities .SPLRCU, were the biggest losers.

The market had opened in the red, weighed by a drop in Cisco and a rise in U.S. 10-year Treasury yields to a seven-year high.

White House Chief Economic Adviser Larry Kudlow expects China to bring a proposal to the talks which would “extend the conversation and permit additional negotiations”.

Cisco (CSCO.O) fell 2.8 percent, the most on the Dow, after the company’s forecast indicated its transition to a software-focused business was a work in progress.