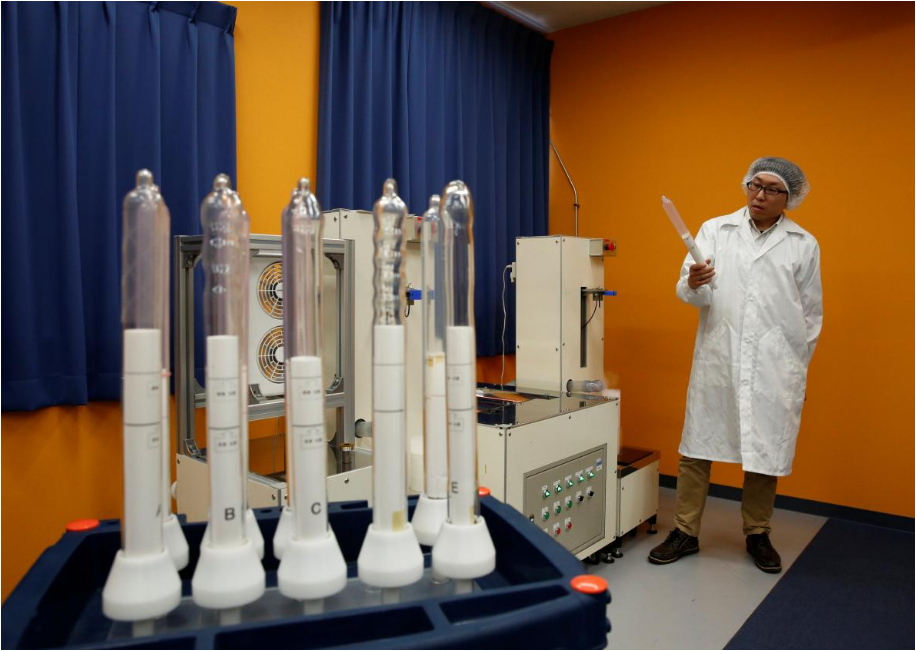 As Japan gears up to host the Rugby World Cup and Olympic Games in consecutive years, many businesses are seizing on the opportunity to capitalize on the influx of tourists, media and athletes for both big events.

The Rugby World Cup kicks off in September 2019 followed by the Tokyo Games 10 months later, giving businesses a unique chance to reach an international and diverse customer base that may be encountering Japanese products for the first time.

One business sector looking to benefit from the arrival of thousands of athletes is the local condom industry.

It has become tradition in the lead-up to Olympic Games for tournament organizers to distribute thousands of free prophylactics to athletes looking to let their hair down once their event is over.

Almost half a million condoms were handed out in the 2016 Rio Games Olympic Village, whilst condom packaging for the Beijing 2008 Olympics featured the Games’ motto “faster, higher, stronger”.

With roughly 10,000 athletes expected to descend on the Olympic Village, once described by gold medal-winning Australian target shooter Mark Russell as “the most testosterone fueled place on earth”, Japanese condom companies are keen to promote their unique products to an international audience.

Sagami Rubber Industries, one of Japan’s leading condom makers, are hoping to use the Olympics to enhance awareness of their ultra-thin Polyurethane sheaths.

Sagami, alongside Japanese competitor Okamoto, produce the world’s thinnest condoms, which are only 0.01 millimeters thick.

“Only two companies, Sagami and Okamoto, are producing the 0.02 and 0.01 millimeter condoms and so we think the Olympics are a good opportunity to show this Japanese quality all over the world,” Sagami senior sales manager Hiroshi Yamashita said.

Britain’s Durex — the official sponsor for London 2012 — US brand Trojan and Australia’s Ansell are the major players on the international market but Yamashita believes Okamoto and Sagami are next in line.

Yamashita spoke of the popularity of the ultra-thin condoms in neighboring China and believes Tokyo 2020 can help broaden Sagami’s scope worldwide.

Olympic organizers have yet to name an official condom supplier.

“If the International Olympic Committee ask us then we would be very happy to supply our product for the Tokyo 2020 Games,” said Yamashita, who predicts 150,000 condoms will be needed.

One place where these condoms could end up being used is at one of Japan’s notorious “love hotels” as Tokyo 2020 organizers face an expected shortage of accommodation.

Japan is already dealing with record numbers of tourists — 28.69 million in 2017 — and the government has set a goal of 40 million foreign visitors by 2020.

In order to satisfy the needs of this influx, the government are keen for tourists to use alternative means of accommodation, such as love hotels, capsule hotels and traditional Japanese inns (ryokan).

Many customers are finding themselves drawn to Japan's love hotels; short-stay hotels with themed rooms that can be reached through discreet entrances, out of curiosity as much as need, according to travel website Booking.com www.booking.com.

“The key that we see in the market at Booking is around curiosity of culture and I think a lot of people are just interested to see what it is like,” said Booking’s Regional Director for North Asia Adam Brownstein.

“Where there is nothing like it where they come from, they want to experience it. That is the great thing about travel: you can try new things and kind of peek behind the curtain.”

Love hotels can be booked by the hour, as well as for longer stays, promising guests privacy. In the past, this has been associated almost exclusively with sexual activity.

However, times are changing.

Booking.com has seen the number of bookings in the love hotel category leap 48 percent in the past year and expect that trend to continue as rugby and Olympic fans look to experience all that Japan has to offer.

“What is interesting about the love hotel sector is that they have very interesting facilities, for example karaoke rooms — which is pretty cool for many foreigners — some will also have bars or very large rooms for families,” added Booking’s Tokyo area manager Donna Morris.

“So we see that it is not just the sort of customers that you might expect to go there.”

American tourist Jerome Davies, who was visiting Tokyo this month with his wife and three children, said he had chosen to stay at a love hotel because it offered a large room at a much cheaper rate than a regular hotel.

“Its clean, it’s well located and it suits our family just fine,” said Davies, standing outside the hotel he had booked for four nights.

“I have stayed in a lot worse places.”

Davies is not alone as thousands of foreign visitors turn to love hotels as a cheap way to broaden their horizons.

As Japan prepares to host back-to-back major sporting events, the country faces an unprecedented challenge but also, for some businesses, a once-in-a-lifetime chance to showcase what they have to offer on the world stage.