BUSINESS On the shop floor, workers wonder what Brexit will bring

On the shop floor, workers wonder what Brexit will bring 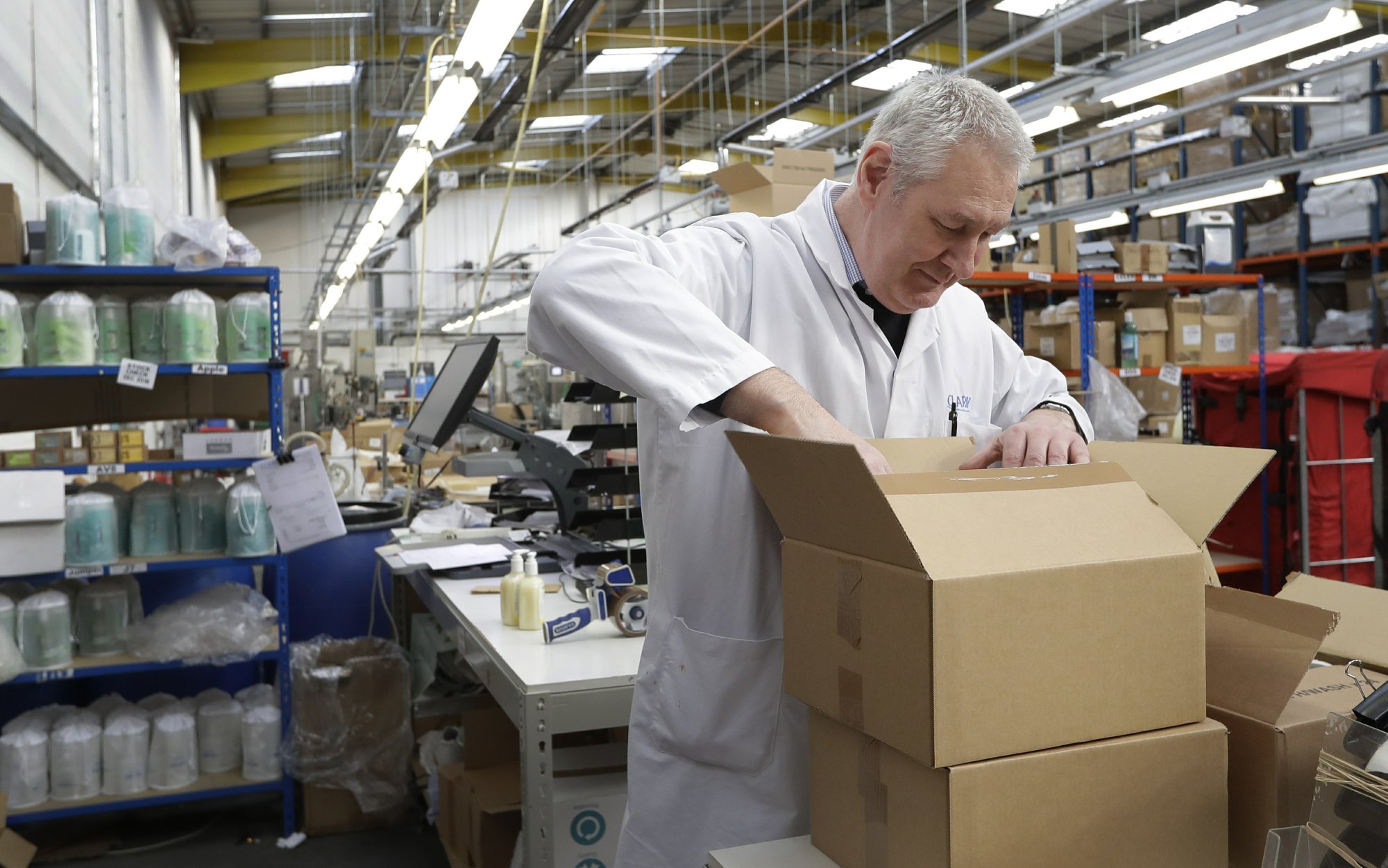 In this photo taken on Thursday, Jan. 17, 2019, Michael O'Brien, Supervisor at Clarity_The Soap Co. prepares an order at the premises in London. (Photo: AP)

It’s an understatement to say that Michael O’Brien is worried about Brexit.

O’Brien is a supervisor at Clarity-The Soap Co., which employs visually impaired adults at a factory in east London. A tall man with a thatch of gray hair, O’Brien has a manner so easy that it sounds as if he is talking about the weather rather than an issue that bitterly divides British society — the country’s looming departure from the European Union.

″(This job) means everything to me,” he said, standing beside a machine that magnifies documents so he can track invoices. “When I came here 4 ½ years ago, I was in a bad way. I got (laid off) from my last job, didn’t think I’d work again. And I came here and it’s given me a lifeline.”

Amid the rancor and political bickering that this week sent Prime Minister Theresa May’s Brexit deal down to the biggest defeat in history, people across the U.K. are worried about what the impasse in Parliament means for them and their families. The anxiety is palpable at Clarity, where people understand that jobs can be precious and hard to come by.

The company traces its roots to 1854 as a social enterprise that employs people with disabilities: Queen Victoria was its first patron and Charles Dickens supported it. Clarity has survived two World Wars, the Blitz and the Great Depression, so Brexit should be a piece of cake. But uncertainty about what rules will apply to trade with the European Union after Britain leaves the bloc is crimping the company’s ability to plan for the future.

Before Britain voted to leave the EU in June 2016, Clarity was preparing to increase production as part of an effort to expand its offering of high-end products, including soaps hand made in the Lake District in northern England. The company dreams of adding another one or two production lines at its factory in east London and adding to its 115-person workforce, but has had to refocus energy on planning for Brexit, spending hard-earned cash to stockpile ingredients.

In some ways, Clarity is better off than companies with more exposure to the potential of chaos at the border in the event of a no-deal Brexit because their market is in the United Kingdom. But the potential for Brexit to disrupt their dreams is immense.

The company, with annual revenue of 2.6 million pounds (3.4 million), sits at the end of supply chains that would be disrupted if Brexit brings back border controls and tariffs.

One key ingredient, Calendula, comes from Egypt and is processed in France, an EU state. They’ve stocked up for this year’s supplies, but who knows after that. The cardboard used to wrap their BECO. bars comes from forests in Scandinavia and milled in Holland — also both in the EU.

Even if those risks don’t materialize, preparing for them is proving to be a drain on attention and resources.

“We’re having to spend a lot of time at the moment contingency planning, thinking about a lot of uncertainty and working through those models, and that’s time that we could be going out there, telling our story — encouraging people to buy from us,” said Camilla Marcus-Dew, the head of commercial at Clarity. “I hope we can move past the uncertainty and go forward with confidence.”

It expected to grow sales by half a million pounds ($646,000) for the year, but now trimmed that figure to 200,000 pounds due to uncertainty and the sluggishness of the economy.

As a social enterprise, the company reinvests profits back into its business and toward the social cause it supports, helping its employees and people with disabilities. That mission dovetails with larger trends. Clarity has a story to tell, which is important in an ever-crowded marketplace as consumers are becoming more socially consciousness and want to know where their products come from.

Clarity was hoping to capitalize on that burgeoning interest. It puts the names of the people that work there on the label of its soaps. Yvonne in bottling gets mentioned on the honey blossom bottle of BECO. hand wash, as does Shane in packaging and Stephen, the receptionist, who greets visitors with a huge smile together with his working dog Owen, who has his own cushion near the front door.

Any disruption to business means more than a hit to the bottom line. It is felt personally.

“We don’t want to slow down,” said Marcus-Dew. “The jobs that we create here are invaluable. They are jobs for many people that wouldn’t be able to work elsewhere. And to create those jobs we need that confidence and for this indecision to be over as quickly as possible.”

Brexit will touch every aspect of life in this country of 66 million. Besides tariffs and import problems, Brexit could reduce the availability of workers — whether skilled ones in finance or healthcare or much-needed unskilled seasonal laborers picking fruit and vegetables. It could hinder academic and scientific research and even rekindle sectarian violence on the Irish border.

Everyone has a stake and that’s part of what makes Brexit hard to agree on.

On the shop floor, people like O’Brien who will be affected by the political turmoil can only watch.

“Of course it’s a worry. People come here to work. They want to work,” he said, adding that Clarity is unique and that anything which threatens it would be terrible. “If this place doesn’t exist, there’s not another place like it in the London area. So as I say, it would be a tragedy.”