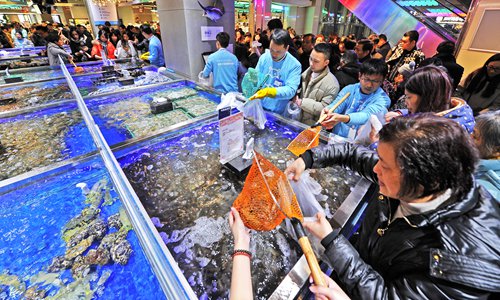 Once declining because of online development, now the offline sector is attracting the attention of online players. In recent years, China's two largest online companies, Alibaba and Tencent, have both invested a lot of money in the offline retail sector. Alibaba started out first, with its investment in Hema Xiansheng supermarkets proving quite successful, and with Tencent following shortly after. Industry experts noted that as costs for gaining online customers rise, offline exploration is a must in order to dominate in the future.

The flames of the commercial war between China's major online companies are now spreading to the offline territory, as they scramble for business opportunities in physical store sales.

Martin Lau is responsible for Tencent's investment business. Recently, he has been quite anxious, because he is not satisfied with the speed or strength of the Tencent investment team's layout in the offline retail sector, a senior executive at a domestic financial institution disclosed to the media.

"In the past month or so, they [Tencent's investment team] have been working insane hours," the aforementioned executive said.

Actually, Tencent's layout in the offline retail sector has recently been extraordinarily intense.

Prior to the 2018 Spring Festival holidays, the company announced it will invest in a number of offline retail enterprises including the Yonghui Superstores, Carrefour as well as HLA (a male clothing seller). So far, this wave of offline retail investment by Tencent is expected to reach more than 20 billion yuan ($3.17 billion) in scale.

In marching into the offline retail sector, a business area that is not so familiar to the online giant, Tencent even relaxed its pace in developing apps.

In 2017, Tencent was restrained when launching small apps, but has shifted many of its efforts to explore opportunities in large business scenes like commercial supermarkets, retail stores and shopping malls, domestic financial news publication Caixin Weekly reported on Monday.

To some extent, Tencent's shift in strategies to explore the offline retail sector has been forced by the achievements made by its biggest competitor Alibaba Group Holding in the retail business world. "Tencent has to grab the chips to be on the offensive," the Caixin report noted.

Alibaba has been exploring the offline retail sector in recent years with stunning strength. Ever since October 2016, when Alibaba's founder Jack Ma Yun put forward the concept of "New Retail", the company has been investing in a string of offline retail companies, including Sanjiang Co, Sun Art Retail as well as Easyhome.

Besides those, Alibaba has got the drop on other online giants in terms of investment in offline retail. According to media reports, Alibaba had already invested about 80 billion yuan in offline retail before Tencent started to march into this area.

Among Alibaba's efforts in the new retail sector, the setting of Hema Xiansheng - also known as Hema Fresh Store - which specializes in selling high-quality seafood and daily necessities, is perhaps the most successful one.

In the fourth quarter of 2017, Hema's revenues reached about 2.5 billion yuan, surging by about 50 percent compared with the previous quarter, said the Caixin report.

The Global Times also visited one Hema Xiansheng supermarket in Shanghai during the 2018 Spring Festival holidays and saw that one needed to queue up at least 20 minutes to buy seafood because there were so many customers in store.

The Caixin report also cited an anonymous source from Alibaba saying that the company will soon initiate a "large-scale replication" of Hema Xiansheng.

But on the whole, Alibaba has not yet achieved an omni-directional victory in the offline retail sector.

For example, the company's alteration of Yintai (a Beijing-based retail chain) has been quite limited despite the fact that Alibaba started investing in the chain as early as 2014.

So far, Hema Xiansheng is likely to be the only offline retail business model that Alibaba has gained complete mastery of, the Caixin report noted.

According to the aforementioned insider from Alibaba, teams in its offline retail segment are all researching why Hema has been so successful in an aim to find their own business direction.

For the next step, Alibaba will grab control of the supply chains in the supermarket retail stores it has already invested in, including Taiwan-based RT-Mart, and will try to convert those traditional stores into digital malls.

One industry insider pointed out that Alibaba's business theory in exploration of the offline retail sector has been investing in heavy assets to widen the gap between itself and other online players in terms of competence.

Apparently, for other companies like Tencent and Baidu, they must find a way different from how Alibaba has tried to expand its influence in the offline retail sector.

To compete with Alibaba's new retail concept, Tencent has launched what it calls "smart retail", which Tencent Chairman Ma Huateng has interpreted as efforts to provide customers with more accommodative, innovative and sustainable retail solutions by means of decentralization methods.

Although different companies raise different concepts, they probably have the same goal of creating a new wave of online-to-offline solutions so that online big data/customer flow and large-scale offline trade locations can supplement each other.

"This combat [between Alibaba and Tencent] in the offline retail sector is not just one combat, but is a comprehensive war to grab the future of real industries," an industry insider commented.

According to Wang Lixing, managing director at the China Renaissance Group, China's online retailers have found that the costs of getting online customers are increasingly rising and even surpassing the costs in offline scenes. So internet giants have realized the importance of attracting customers in brick-and-mortar locations.

Also, as the competition rages between the two internet giants, offline retail companies are also making hard choices regarding which one of them they should stand by.

According to the Caixin report, almost all the offline retailers that have cooperated with either Alibaba or Tencent so far once negotiated with both of them.

However, in the end, they had to choose one of them to collaborate with because of the fierce competition between the two giants.

This story is based on an article published by Caixin Weekly.