Shanghai is consolidating its position as a hub for the online new economy, a year after the municipal government released a guideline to bolster the sector's development. 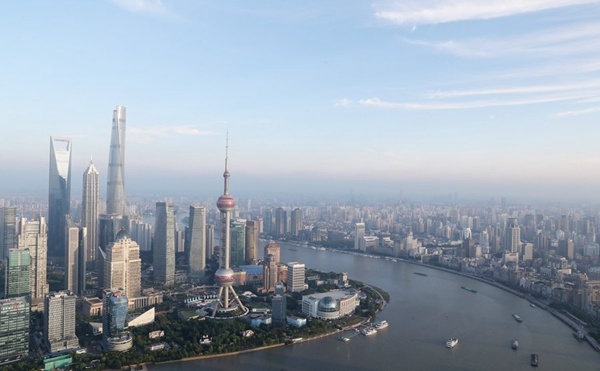 Photo taken on June 21, 2018 shows a view of the Lujiazui area in Shanghai, east China. [Photo/Xinhua]

According to a recent report, the metropolis saw internet-related businesses to be a cornerstone in driving economic growth in the past year, and found itself in a leading position in several key realms from digital payments to online literature.

The White Paper on Shanghai's Online New Economy 2020 was released as the city kicked off an information consumption-themed campaign as one pillar of the city's 5-5 Shopping Festival to boost spending.

The report found that despite COVID-19, Shanghai's software and information services sector saw added value jump 13.5 percent year-on-year during the festival, accounting for 11.5 percent of all added output across the entire services sector.

Besides, Shanghai is now home to 21 of the Top 100 internet-based companies in China. By the end of October, 84,000 companies were engaged in cross-border e-commerce, which greatly facilitated exports for small and medium-sized Chinese companies at the height of the pandemic.

"Shanghai's goal of building itself into an international consumption center should also include information consumption," said Vice-Mayor Wu Qing during a ceremony on Monday. "We should prioritize the development of the online new economy across 12 sectors like industrial internet, online healthcare, remote education and grocery e-commerce."

The month-long festival, spanning Monday to June 17, will showcase a number of new technologies and business models applied to all walks of life.

In addition to hundreds of campaigns, a virtual gala was held on opening night, with influencers promoting information-related products and services such as cloud computing, SaaS (software as a service), and online cultural and entertainment offerings.

The Shanghai branch of China Mobile, the country's top telecom carrier, is dishing out a number of perks such as steep subsidies and preferential after-sales services for individual purchases of 5G smartphones. The company on Sunday unveiled the edge-to-edge 5G network slicing, a technology that helps business and government optimize their respective industrial applications.

"For instance, big data can predict customer needs and calculate the best route in real time to ensure smooth and in-time door-to-door delivery," he said.

"As a medical AI company, we do see the necessity to use internet technologies to empower the traditional industry," said Zhan Yiqiang, co-founder and chief operating officer of United Imaging Intelligence.

The company is now partnering with some 300 medical institutions nationwide to run examinations and help doctors detect overlooked fractures on X-rays.

"For the next step, we look forward to using more novel technologies like 5G to revolutionize the entire work flow of hospitals and enhance operational efficiency," he said.