Researchers raise concerns that vaping will create a new generation of smokers. 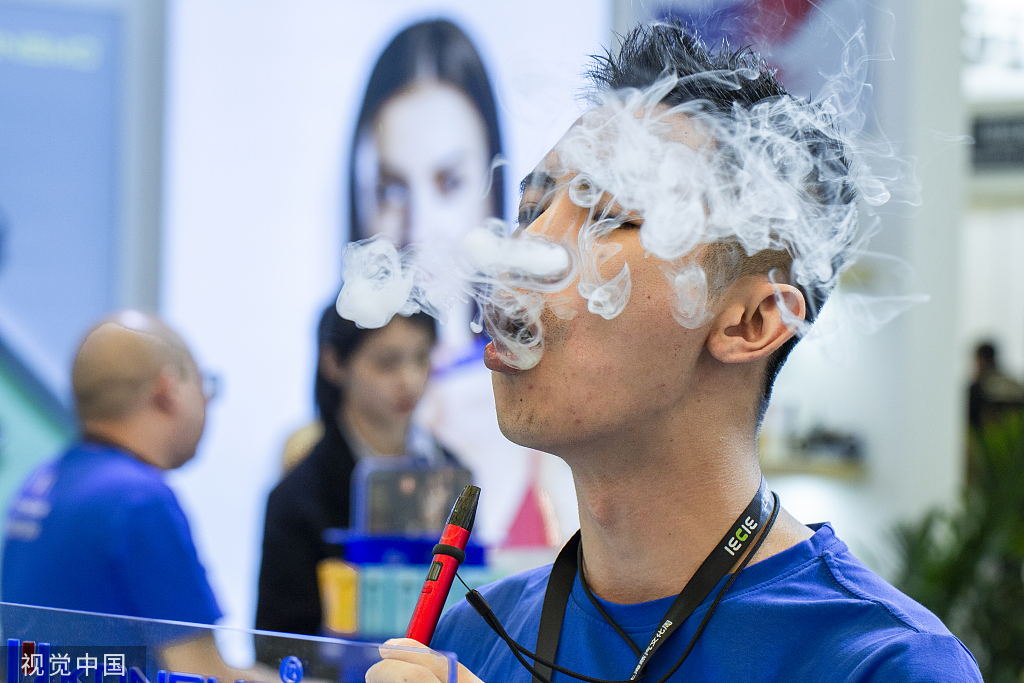 A man smokes an e-cigarette in Shanghai in October. (Photo: VCG)

China's online marketplace has taken action to remove vaping products after a nationwide ban of online sales and advertising of such products took effect last week.

The State Tobacco Monopoly Administration and the State Administration for Market Regulation ordered makers and sellers of electronic cigarettes to shut down online shops and required the country's e-commerce market to remove all related promotions and products, according to a government notice released last Friday.

The Alibaba Group, which manages Taobao, the country's largest online marketplace, released a statement on Thursday saying that it would immediately remove all vaping products on the platform and forbid advertising of e-cigarettes.

Liu Meng, an employee with Kuaishou, a fast-growing shortvideo mobile app, said the firm has blocked search results for keywords involving e-cigarettes or well-known brands in the vaping industry.

She added that upcoming rectification measures will target promotions of e-cigarettes via livestreaming, an emerging method of sale that has rapidly gained traction among young buyers.

During a talk that was convened by market regulators in Beijing on Tuesday, several companies also admitted that vaping products were still readily available online, and the newly released ban has had a minimal effect on sales of e-cigarettes.

"It is also murky at this stage as to who will take leading roles in supervision," said Zhang Jianshu, head of the Beijing Tobacco Control Association.

Kong Fanjun, a manager in the procurement and sales department of JD.com, said the company would strive to comply with the regulation.

"Many e-cigarette firms have signed contracts with us before, leading to large inventories and pending orders," he was quoted by China Central Television as saying.

China has recently stepped up oversight of its emerging e-cigarette industry, starting with a statement released by market regulators last August that forbid selling vaping products to people under 18 years of age.

The primary source of concern is that e-cigarettes will create a new generation of nicotine addicts, a worrying trend that will stall the country's progress toward achieving the goal of shrinking the population of smokers to 20 percent by 2030. The number currently stands at about 26 percent.

It is estimated that there are about 10 million vapers aged 15 and above in China, according to Xiao Lin, a tobacco control researcher at the Chinese Center for Disease Control and Prevention.

"About 1.5 percent of people aged 15 to 24 have vaped-the highest among all age groups-and 45.4 percent of all vapers purchase e-cigarettes via the internet," she said.

While tobacco control experts have applauded the full ban of e-cigarettes across the country's internet sphere, they also called for establishing more regulatory guidelines and production standards to oversee the industry.