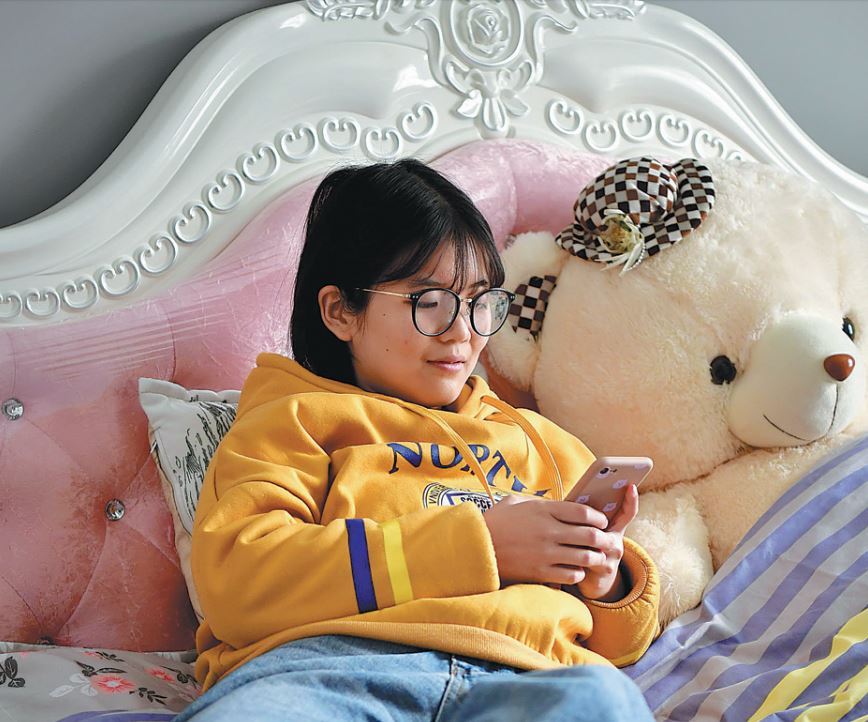 A girl reads on her mobile phone at home in Ningqiang county of Hanzhong, Northwest China's Shaanxi province, on March 13. (Photo: Xinhua)

Zhou Xue, a post-1990s generation IT professional, registered an account with short video platform Douyin about two years ago. In the past, she just perused funny videos posted by other users. But the novel coronavirus outbreak has pushed Zhou to entertain herself at home and upload videos that portray her daily life.

Her first episode on how to make tiramisu received more than 5,000 thumbs-up and 300 comments. "I never imagined my videos could be well-received by netizens. Now I sometimes interact with people who leave comments on my clips."

Zhou said that apart from creating videos on her own, she pays attention to live updates and expert analysis and advice on preventing and controlling the epidemic, especially information from front-line medical workers in Wuhan, capital of the hardest-hit Hubei province.

Moreover, Zhou downloaded eight romantic fictions from WeChat Read, a mobile reading application, and read for about one hour each day through the app during the epidemic period.

"Reading brings me great joy and helps ease anxiety. I also listen to audio books through Ximalaya FM, an audio content platform, before I go to sleep, and spend money on programs I like," said Zhou.

The online video and digital reading industry is seeing a big boost amid the epidemic, and becoming a major method of entertainment as tens of millions of Chinese are confined indoors due to restrictions on large gatherings and travel.

Short video platforms with livestreaming features saw a sharp increase in user activity in the first two months of this year, according to a report from QuestMobile, a mobile internet big data company. Over the Lunar New Year holiday (Jan 24－Feb 2), users spent around 105 minutes on short video apps per day, compared to 78 minutes during last year's holiday period.

Daily active users of Kuaishou surged 40 percent during the Spring Festival holiday, compared with the festive season last year. Douyin also saw a 26 percent rise in DAUs during the same period than a year ago, the report said.

Reading via mobile phone apps has seen a surge in demand amid the outbreak. According to a report released by market consultancy iResearch, more than 70 percent of users spend more time on reading during the epidemic than usual, and over 50 percent users said they read novels every day.

Statistics from QQ reading, a subbrand of online literature platform China Literature, said users from Beijing, Chengdu, Shenzhen, Chongqing and Guangzhou read the most from Jan 24 to Feb 7.

China Literature, which has game giant Tencent as its shareholder and strategic partner, distributes its content via the mobile QQ app, QQ browser, WeChat Reading, Tencent News and Tencent Video. The company said the epidemic has a positive influence on its online business, as the paid membership and the time people spend on reading have grown recently, adding it will entice more new users and develop the online paid reading service.

As the exclusive interactive partner of the 2020 Spring Festival Gala aired on Lunar New Year's Eve on Jan 24, Kuaishou announced that 63.9 billion user engagements were made during the live broadcast, which is the highest amount in the history of the gala.

Kuaishou gave viewers 1 billion yuan ($144 million) in virtual "red envelopes", and encouraged recipients to donate all the envelopes they collected during the event to Wuhan. And if they did, Kuaishou would donate an extra 10 percent.

It said the number of hits on its "pneumonia prevention and control" channel has exceeded 3 billion, and livestreaming programs related to the epidemic received more than 1 billion views from Jan 20 to 31.

Douyin said a total of 43.73 million epidemic-themed searches regarding Wuhan were made during the Spring Festival holiday, with 492,000 videos related to support for front-line staff and 66,000 for donation information. About 107,000 people posted 259,000 videos recording their daily lives in Wuhan, which have been reviewed 3.3 billion times by Douyin users.

"The whole video industry has been boosted by the 'red envelope' campaign during Lunar New Year and the epidemic, along with rising user traffic and usage time," said Ma Shicong, an analyst with Beijing-based internet consultancy Analysys, adding that 5G and ultrahigh-definition technologies have been applied in this year's live broadcast.

Long videos also became an important way for people to spend time at home during this year's Spring Festival. Users of online video-streaming platforms spent an average of 98 minutes on these platforms each day, compared to 82 minutes during the festive season last year.

The fifth season of romantic sitcom iPartment was iQiyi's biggest hit during the holiday period, with over 74 million VIP users watching the TV series via the platform.

"The data flow of videos has skyrocketed amid the epidemic as most people stayed at home, which also has some positive effects on users who are willing to pay for content, and the acquisition of new users," said Wang Xiaodong, chief financial officer of iQiyi.

However, the increase in traffic data and new members is slowing down with the resumption of work and production.

Mango TV has a broad range of variety shows and created a "cloud" recording method, with stars and hosts staying at home to make video logs about their daily stories amid the epidemic.