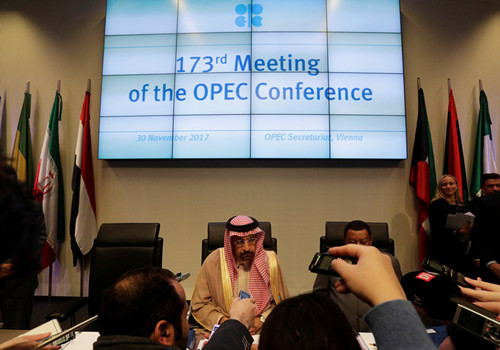 VIENNA  - OPEC and non-OPEC producers led by Russia agreed on Thursday to extend oil output cuts until the end of 2018 as they try to finish clearing a global glut of crude while signaling a possible early exit from the deal if the market overheats.

Russia, which this year reduced production significantly with OPEC for the first time, has been pushing for a clear message on how to exit the cuts so the market doesn't flip into a deficit too soon, prices don't rally too fast and rival U.S.

Russia needs much lower oil prices to balance its budget than OPEC's leader Saudi Arabia, which is preparing a stock market listing for national energy champion Aramco next year and would hence benefit from pricier crude.

The producers' current deal, under which they are cutting supply by about 1.8 million barrels per day (bpd) in an effort to boost oil prices, expires in March.

Saudi Energy Minister Khalid al-Falih told reporters the Organization of the Petroleum Exporting Countries and non-OPEC allies had agreed to extend the cuts by nine months until the end of 2018, as largely anticipated by the market. 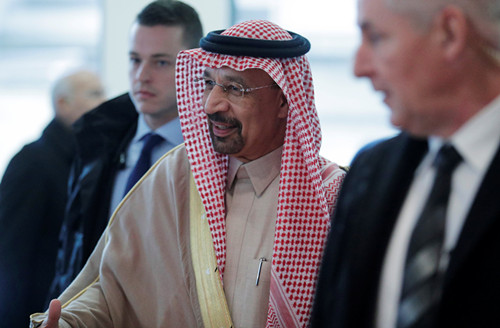 OPEC also decided to cap the combined output of Nigeria and Libya at 2017 levels below 2.8 million bpd. Both countries have been exempt from cuts due to unrest and lower-than-normal production.

Falih said it was premature to talk about exiting the cuts at least for a couple of quarters as the world was entering a season of low winter demand. He added that OPEC would examine progress at its next regular meeting in June.

"When we get to an exit, we are going to do it very gradually ... to make sure we don’t shock the market," he said.

OPEC and Russia together produce over 40 percent of global oil. Moscow's first real cooperation with OPEC, put together with the help of President Vladimir Putin, has been crucial in roughly halving an excess of global oil stocks since January.

With oil prices rising above $60, Russia has expressed concerns that an extension for the whole of 2018 could prompt a spike in crude production in the United States, which is not participating in the deal.

A joint OPEC and non-OPEC communique said the next meeting in June 2018 would present an opportunity to adjust the agreement based on market conditions.

The Iraqi, Iranian and Angolan oil ministers also said before Thursday's meetings that a review of the deal was possible in June in case the market became too tight. 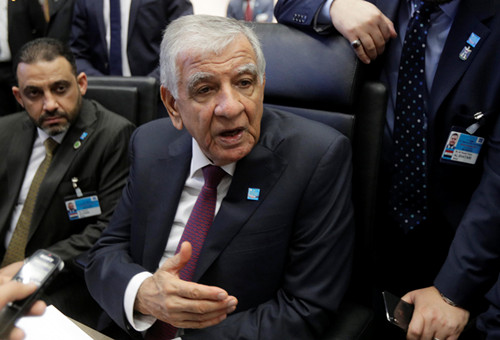 Iraq's Oil Minister Jabar Ali al-Luaibi talks to journalists at the beginning of an OPEC meeting in Vienna, Austria, November 30, 2017.

International benchmark Brent crude <LCOc1> rose around 0.5 percent on Thursday to trade above $63 per barrel.

U.S. shale oil producers, which effectively triggered the global oil glut of recent years, have been adjusting their message over the past year, switching away from combative language with regard to OPEC actions.

"If producers in the U.S. increase their rig count over the next few months due to higher prices then I expect another price collapse by the end of 2018," said Scott Sheffield, executive chairman of Pioneer Natural Resources Co <PXD.N>, one of the largest producers in the Permian Basin of Texas and New Mexico, the largest U.S. oilfield.

"I hope that all U.S. shale companies will maintain their current rig counts and use all excess cash flow to increase dividends back to their shareholders," he told Reuters.

Gary Ross, a veteran OPEC watcher and founder of Pira consultancy, said the market could surprise on the upside with Brent rising to $70 if there were a major supply disruption.

"Everywhere you look there is an ever-present risk to supply," Ross said.

"In Iraq's Kurdistan there is a major risk to oil exports because of tensions with Baghdad, in Libya militias are still fighting, in Nigeria the risks of disruptions are significant, Venezuela is on the verge of default, Iran could again face U.S. financial sanctions and even in Saudi Arabia political risk is on the rise," Ross added.

The production cuts have been in place since the start of 2017 and helped halve an excess of global oil stocks although those remain at 140 million barrels above the five-year average, according to OPEC.

Russia has signaled it wants to understand better how producers will exit from the cuts as it needs to provide guidance to its private and state energy companies. On Thursday, Novak said all companies were on board with the latest limits.