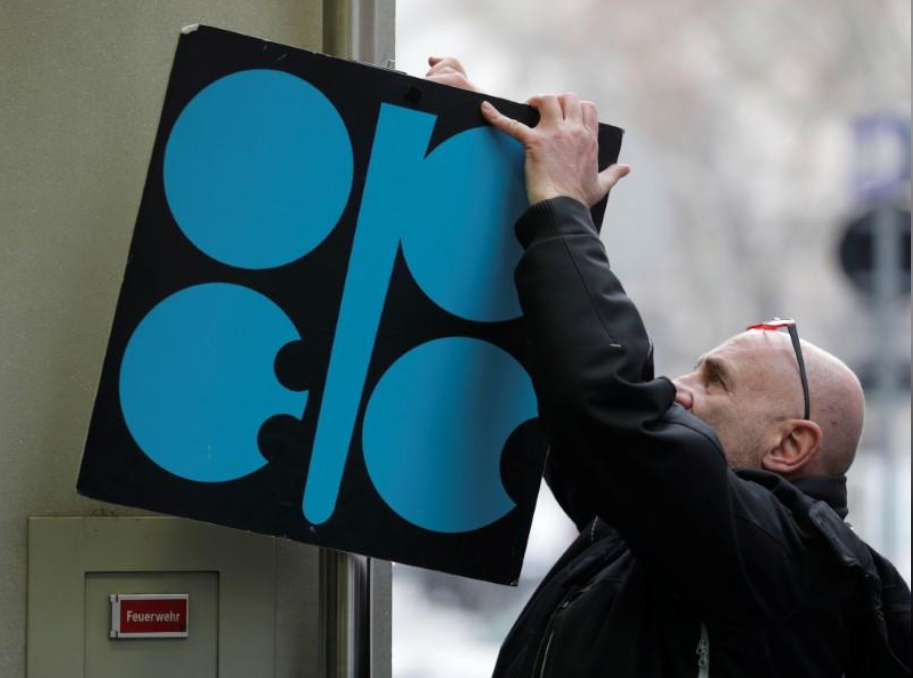 A man fixes a sign with OPEC's logo next to its headquarter's entrance before a meeting of OPEC oil ministers in Vienna, Austria, November 29, 2017 (Photo: Reuters)

Top oil exporter Saudi Arabia would be happy to see crude rise to $80 or even $100 a barrel, three industry sources said, a sign Riyadh will seek no changes to an OPEC supply-cutting deal even though the agreement’s original target is within sight.

The Organization of the Petroleum Exporting Countries, Russia and several other producers began to reduce supply in January 2017 in an attempt to erase a glut. They have extended the pact until December 2018 and meet in June to review policy.

OPEC is closing in on the original target of the pact - reducing industrialized nations’ oil inventories to their five-year average. There is no indication yet, however, that Saudi Arabia or its allies want to wind down the supply cut.

Over the past year, Saudi Arabia has emerged as OPEC’s leading supporter of measures to boost prices, a change from its more moderate stance in earlier years. Iran, once a keen OPEC price hawk, now wants lower prices than Saudi Arabia.

Industry sources have linked this shift in Saudi Arabia’s stance to its desire to support the valuation of state oil company Aramco ahead of the kingdom’s planned sale of a minority stake in an initial public offering.

The supply cut has helped boost oil prices this year to $73 a barrel, the highest since November 2014. Oil began a slide from above $100 - a price that Saudi Arabia endorsed in 2012 - in mid-2014, when growing supply from rival sources such as US shale began to swamp the market.

But the kingdom wants the rally to go further. Two industry sources said a desired crude price of $80 or even $100 was circulated by senior Saudi officials in closed-door briefings in recent weeks.

“We have come full circle,” a separate high-level industry source said of the change in Saudi thinking. “I would not be surprised if Saudi Arabia wanted oil at $100 until this IPO is out of the way.”

“Saudi Arabia wants higher oil prices and yes, probably for the IPO, but it isn’t just that,” an OPEC source said.

“Look at the economic reforms and projects they want to do, and the war in Yemen. How are they going to pay for all that? They need higher prices.”

To be sure, OPEC and Saudi Arabia have no official price target and say the objective of the production cut is to balance supply and demand, and reduce the inventory glut.

But guidance on preferred price levels comes from officials speaking off the record, and from industry sources who have discussed the issue with Saudi officials.

“I personally think that now $70 is the floor for oil prices,” a second OPEC source said. “But OPEC is unlikely to make any changes in June, maybe by the end of the year. The market still needs support.”

OPEC and its partners meet on June 22 to review policy and before then a ministerial monitoring panel gathers in Jeddah, Saudi Arabia, on April 20.

The cuts have been even bigger than those specified in the deal, thanks in part to a slide in Venezuelan production due to an economic crisis in the South American country.

Compliance has reached 150 percent, according to OPEC, meaning the organization’s members have cut production by about 1.8 million barrels per day, 600,000 bpd more than pledged.

Few OPEC sources call for an exit strategy. Most officials are talking of introducing additional inventory metrics to assess the success of the deal, and of a need to support investment in new production to avert any supply crunch.

The impression is that oil prices are seen as not yet high enough to encourage sufficient oil investment.

“We will know what will be the good price when the market is balanced and we have enough investments,” the United Arab Emirates’ energy minister, Suhail al-Mazroui, told Reuters last week. “We need to have more investments coming.”

The Jeddah meeting of the Joint Ministerial Monitoring Committee is unlikely to change the parameters for assessing the deal’s success, Mazroui and other OPEC officials said, and sources see little chance of a major tweak in June.

“Even if we reach the five-year average before June, it does not mean we just go and open the taps,” a third OPEC source said. “We have to test it.”