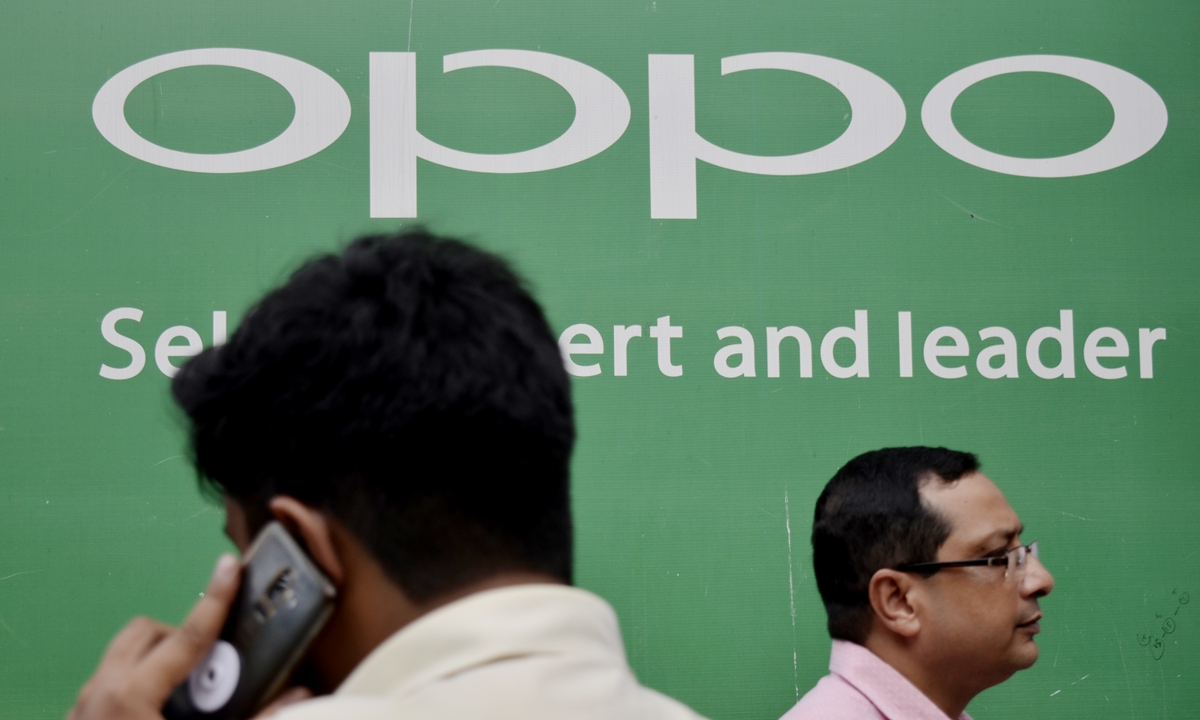 Chinese smartphone maker OPPO's reported deal to set up a plant in Egypt may herald an exodus of Chinese mobile phone firms from India amid the country's escalating crackdown on Chinese companies, an industry insider said on Wednesday.

For brands that are heavily reliant on the overseas market to generate a significant portion of their revenue, OPPO's memorandum of understanding with the Egyptian government to set up a $20 million smartphone facility may be a pacesetter, a Chinese executive based in India told the Global Times.

"The management in Chinese smartphone brands in India felt a palpable sense of being squeezed by the Indian government's crackdown and its [protectionist] actions to improve domestic companies' capability to make sophisticated electronics such as smartphones," the executive said, adding that the OPPO case may not be unique.

Chinese smartphone brands are also looking at Indonesia, Bangladesh and Nigeria as replacements for India, the executive said, noting that companies will evaluate bilateral ties, market potential, preferential policies and labor costs, in that order.

OPPO's reported move comes as India is apparently upping the ante in cracking down on Chinese companies operating in the Indian market.

Indian tax authorities have been probing virtually every major Chinese smartphone company over alleged tax evasion, and more than 1,000 Chinese businesspeople have allegedly been mistreated over visa issues.

Almost 2,800 foreign companies left the Indian market between 2014 and November 2021, according to media reports.

High tariffs and tax disputes have become the two leading factors behind the foreign company exodus from India, analysts said.

India has stepped up its crackdown on Chinese firms over the years. It has banned more than Chinese 300 apps, including Tencent's WeChat and ByteDance's TikTok, according to media reports.

It is also reportedly seeking to bar Chinese companies from its sub-$150 phone market in a bid to bolster the position of domestic players, though an Indian official has denied the report.

The Chinese executive said the reason for the Indian government to call off the reported move is the realization that its domestic smartphone production capacity still has not reached the level where it can fill the gap left by Chinese firms, should they be banished from the market segment.

India has also been seeking to bolster its domestic smartphone manufacturing sector, though it faces many challenges.

For instance, Apple supplier Foxconn announced a plan to work with Indian giant Vedanta on a $19.5 billion deal on Tuesday to set up semiconductor and display production plants in Gujarat, the home state of Indian Prime Minister Narendra Modi.

Also, Indian conglomerate Tata Group is in talks with Taiwan region-based Apple supplier Wistron to ramp up the latter's iPhone production capacity by 500 percent from the current level, according to a Bloomberg report on September 9. The deal could pave the way for Tata to become the first Indian company to assemble iPhones, the report added.