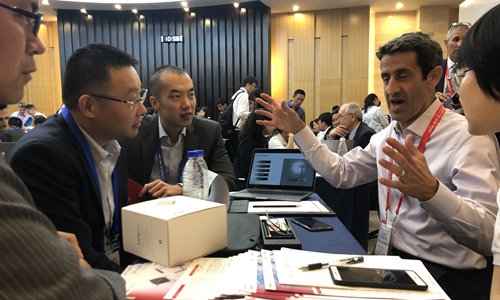 China and Israel are developing more interest in each other, especially when it comes to advanced technology, and their cooperation isn't being affected by the China-US trade dispute.Instead, Israel-based companies are seeking to establish firm footholds in China and invest more in the country, entrepreneurs and investors told the Global Times.More than 110 Israeli start-ups attended the one-day China-Israel Investment Conference held on Tuesday in Jinan, capital of East China's Shandong Province. "Actually, more than 200 start-ups signed up for the event in Israel," said Benjamin Peng, managing director and head of China of Cukierman & Co Investment House, an Israeli investment bank and one of the main organizers of the event."There were about 90 start-ups that attended last year's conference in Foshan [South China's Guangdong Province], so more Israeli companies are eagerly exploring the Chinese market," Peng told the Global Times on Tuesday.More than 1,800 Chinese investors including institutions and individuals attended the conference.Israel has advantages in such cutting-edge sectors as advanced manufacturing, life science and new energy, while China offers huge scope for Israeli core technologies to give full play to their advantages, forging a strong complementary relationship, Peng explained. The Middle East nation, though small in size and population, is a world-renowned start-up location with more than 6,000 high-technology start-ups and more than 350 research and development (R&D) centers invested in by multinational companies, according to the Xinhua News Agency.Chinese technology companies such as Huawei, Legend and Xiaomi have established R&D centers in Israel.Opportunities aheadAs an important ally of the US, Israel seems to be in an awkward position because of the China-US trade war, but the country is trying to fill the void left by some Western countries in China's pursuit of high-quality development based on new engines."You can see that so many companies have come to the event, which proves that their confidence in China is not at all affected," Zhang Jiang, managing partner at Shanghai-based Ping An Ventures, told the Global Times on the sidelines of the event.In fact, many Israeli businessmen hold a very pragmatic and optimistic attitude, according to Zhang. "For them, it means opportunities have just come, so they want to take the initiative and push ahead."We cannot say that all innovations around the world come from Israel, but it is definitely a good source of technology for China, especially amid the trade war," Zhang noted."Compared with the US market, which is a traditional one for Israeli companies, China is more of a newly emerging one with huge potential that cannot be ignored," said Zhang.Gil Vinitzky, co-founder and CEO of Israeli start-up RFISee, which developed the world's first 4D imaging radar chips, told the Global Times on Monday that he wants to open a subsidiary focused on chip design and manufacturing in China this year with the help of Chinese investors. RFISee's chips provide the next generation of ears and eyes for the driverless vehicles."We want to seize the opportunity here in China as the government is greatly supporting the transformation toward advanced manufacturing and cutting-edge technologies such as artificial intelligence and autonomous driving," said Vinitzky.He is confident that the China-US trade war will not cause any concern for the company's further development in China, even if it has some deals from the US. "Good radar chips are needed everywhere."Chipset exports from Israel jumped 80 percent in 2018 to $2.6 billion, and at least 80 percent of the sales came from Intel's Kiryat Gat plant, according to a Reuters report in March. Sales to China of inspection equipment for chip manufacturing jumped 64 percent to $450 million in 2018, said the report, citing Israel's export institute.Another Israeli start-up, CENS Materials, is betting on disruptive technology's evolution in China's auto sector: the process of going green in electric vehicles (EVs). The company concentrates on a technology called carbon nanotube that gives EV batteries longer driving ranges and longer lives."China is leading the EV trend in the world with some big battery makers here. We're seeking an opportunity to have Chinese customers or partners," Michael Bromfman, CEO of CENS Materials, told the Global Times on the sidelines of the conference."Asian countries such China, Japan and South Korea are dominating the EV battery sector and China is such a huge market," Bromfman said.Prospective future

For most Israeli companies, China is no longer a developing, immature market characterized by low-end manufacturing. It has become a new frontier in technological exploration and innovation."Some Israeli companies are moving their R&D and headquarters to China so they can expand their market share even around the globe," said Zhang.As the US is conducting screening of Chinese investment in the country in the name of national security, Israeli companies have felt that Chinese attention is turning toward them, he added.ParaZero, an Israeli provider of drone safety systems, has its products fully made and packed in Shenzhen, a technology hub in South China's Guangdong Province. The company is facing tariff hikes for its exports from China to the US."But we won't transfer our manufacturing partnerships to other countries because of the trade war. We won't give up," ParaZero's CEO Eden Attias told the Global Times on Tuesday.China is Israel's largest trading partner in Asia and third-largest one in the world. Bilateral trade reached $13.9 billion in 2018, up 6 percent on a yearly basis, data from China's Ministry of Commerce showed in March. The scale of bilateral trade, although a small figure compared with China's trade with the US or the EU, is about 200 times larger than it was about two decades ago, according to a report by US-based think tank Council on Foreign Relations in June last year.