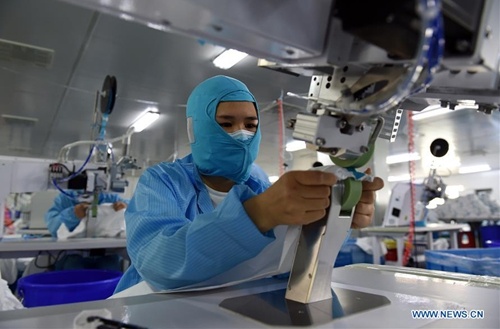 The once-hot medical protective equipment industry in China is facing a drastic drop in domestic and export orders due to the containment of the coronavirus and tighter regulation of exports, industry insiders said, and many producers are leaving the industry as profitability plunges.

Wu Kangping, head of Zhejiang Longtai Medical Technology Co said international orders for medical protective suits and masks, most of which are from Europe, have plunged as much as 90 percent from the peak at April. Domestic demand has been declining since May, and it now accounts for less than 5 percent of the plant's total production.

"There are only sporadic orders from overseas nowadays, so our production has also dropped," Wu said. "We used to produce a few thousand medical suits a day, nowadays it's less than 10 percent of that number."

Exports of medical supplies surged earlier this year. Between March 1 and April 4, more than 37.5 million medical suits were exported, with a total value of 10.2 billion yuan ($1.44 billion), according to Chinese customs.

However, according to Wu, China's containment of COVID-19 has meant a steady drop in orders. Meanwhile, tighter export rules have led to fewer foreign orders. Earlier this year, surging global demand for medical suits and masks led to reports of substandard medical exports from China.

In April, China's authorities, including the Ministry of Commerce and the General Administration of Customs imposed tougher regulations on the sector, including compulsory registrations and a white list of exporters.

"The white list and the lengthy process of obtaining registration certificates have drastically reduced exports of medical supplies since April, and international demand has stabilized compared with February and March," said Wu.

The shrinking market has meant plunging prices for melt-blown nonwoven material, the main material for making protective suits and masks. According to Wu, the price peaked in April at around 8 yuan per meter but has dropped back to below its previous level of 3 to 4 yuan.

Wang Xuguang, a manufacturer of medical protective suits based in Beijing, said that many smaller companies that shifted to making medical suits and masks during the peak of demand around April have left the industry because they can't make a profit.

Wang told the Global Times that the company has been making medical protective suits for many years, and it has established long-term clients, but now it has excess inventory.