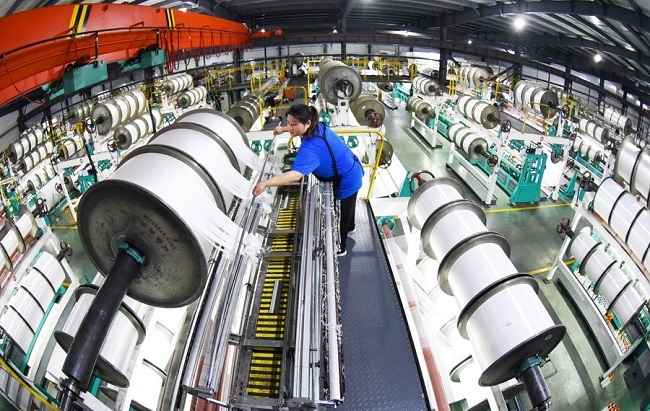 A worker is busy on the production line at the weaving workshop in an economy development zone in Lianyungang, east China's Jiangsu Province, Oct. 19, 2020. (Photo by Geng Yuhe/Xinhua)

According to rough statistics, 27 provinces in China have recently announced the economic data in the first three quarters of this year, and 23 of them have seen their economic growth turn positive, reported Shanghai Securities News Tuesday.

Of the other four regions, Liaoning Province, Hubei Province and the Inner Mongolia Autonomous Region had negative while Tianjin Municipality had zero economic growth during this period.

Since the second half of the year, China's local economy continues to pick up. According to statistics, so far 14 provinces in the country have achieved an economic growth of or exceeding 2 percent from January to September this year.

Southwest China's Guizhou Province boasts the highest economic growth in the period, registering 3.2 percent, and the province's economic growth has ranked among the top in China for 39 consecutive quarters.

Gansu, Yunnan, Hunan, Jiangsu, Anhui, Jiangxi, Fujian, Sichuan, Zhejiang provinces, Chongqing Municipality, the Ningxia Hui Autonomous Region and the Xinjiang Uygur Autonomous Region each realized an economic growth above 2 percent. Most of the regions are located in central and western China and the Yangtze River Delta.

Although Liaoning, Hubei and Inner Mongolia had negative economic growth, the decline continued to narrow.

For instance, the economic growth of Hubei dropped by 10.4 percent year on year in the first three quarters, but the decline narrowed by 8.9 percentage points from the first half of the year.

Heilongjiang, Hebei provinces, the Tibet Autonomous Region and Shanghai Municipality haven't yet unveiled the latest economic data, but there have been positive signals from relevant meetings of these regions.

In terms of economic aggregate, the gross domestic product (GDP) of Jiangsu and Zhejiang in the first nine months of this year reached 7,380.88 billion yuan and 4,582.6 billion yuan, ranking the second and the fourth nationwide, respectively.

After the release of the latest economic data, various localities have held meetings to arrange the economic work in the fourth quarter, focusing on stabilizing industrial development, expanding investment and consumption, etc.

South China's Guangdong Province proposed to strengthen the support for the development of the real economy, promote the construction of key projects, especially major foreign-funded projects, and enhance the stabilization momentum of foreign trade and foreign investment.

Northeast China's Liaoning Province proposed to make good use of the special bonds issued by the central government, and plan to reserve a number of high-quality development projects, particularly energy infrastructure and digital infrastructure projects.

With the resumption of efficient investment, China's economic growth in the fourth quarter will further accelerate, said Lian Ping, chief economist with Zhixin Investment Research Institute, a think tank based in Shanghai.