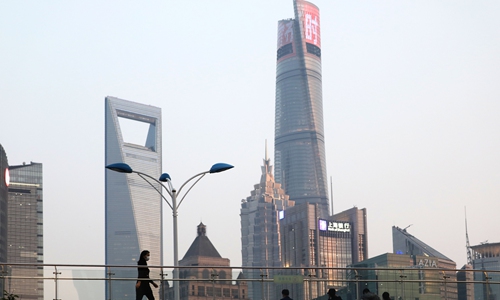 A resident walks through the overpass at Lujiazui area of Pudong, one of the influential financial centers in China. (Photo: GT)

The growing number of newly-launched ventures in China signals an accelerating pace of economic recovery as the Covid-19 is broadly brought under control within the country. More than 830,300 companies were registered in April, which is a record monthly high.

According to the statistics by qcc.com, a Chinese corporate database, there were about 830,300 companies newly registered in the country during April, soaring from 130,000 in February when the coronavirus was wreaking havoc on the economy by shutting down many non-essential sectors, the Securities Times reported.

Specifically, 234,900 new companies were registered in South China's Guangdong, which is one of China's largest manufacturing powerhouses, followed by Shandong, Jiangsu, and Zhejiang provinces.

Central China's Hubei Province saw the least number of new business launches - 26,500, as the region was hit hardest by the killing virus.

While China's production has recovered for about two months, the rising figures show the nation's economic activity has been gradually regaining its past momentum.

According to a report by the Evergrande Research Institute, China has basically overcome the novel coronavirus public health crisis as manufacturing and services are reopened, and the government's rising stimulus are accelerating a plethora of new infrastructure projects.

However, the report noted that government policies should continue to support small and medium-sized enterprises to create more jobs and prevent business failures.

Data by qcc.com showed that average monthly cancellations of businesses between February and April were 126,200, lower than that of 2019, the Securities Times said.

The report noted canceling a company's registration requires more than three months but registration only needs 10 working days, so there might be a delay in showing the real picture of how many companies failed.