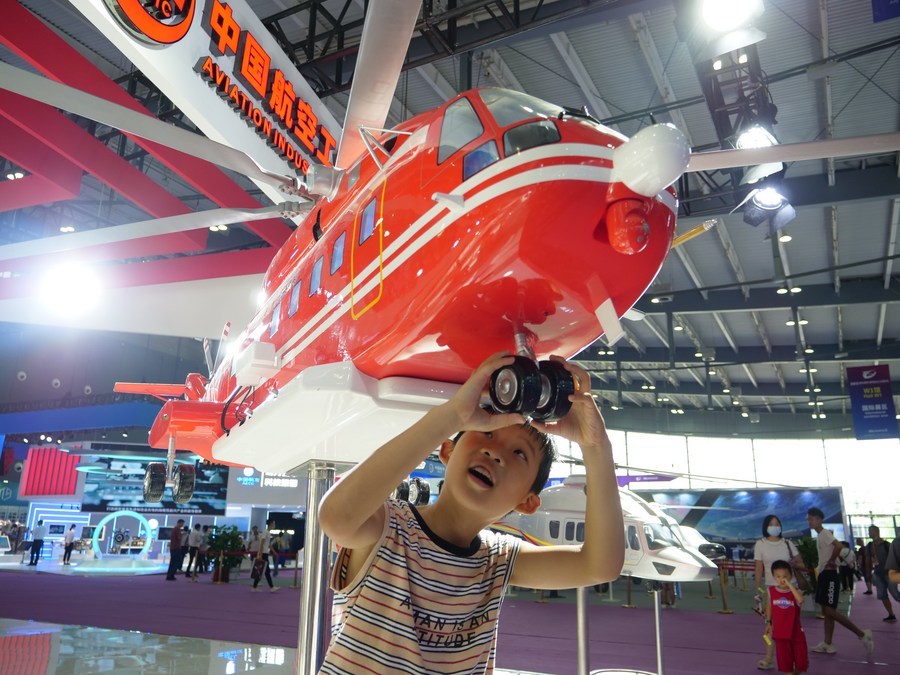 A boy has a careful look at a helicopter model at the Hunan International General Aviation Industry Expo, in central China's Hunan Province, July 16, 2021. (Photo: Xinhua)

More than 300 domestic and foreign experts, scholars and business leaders, as well as diplomatic envoys and business association representatives from 17 countries, attended the expo.

General aviation has become a key focus as China's potential in the area is expected to inject new vitality into the aviation industry, which has been plagued by the pandemic over the past two years.

Data from the Civil Aviation Administration of China (CAAC) shows that during the 13th Five-Year Plan period (2016-2020), the number of companies in China's general aviation industry rose to 523. Together, they owned a fleet of 2,892 aircraft.

Over the past five years, China's general aviation industry exceeded 4.57 million flying hours, with an average annual increase of 13.7 percent, 2.7 percentage points higher than the increase seen in transportation aviation.

At the expo, guests and business representatives from Mexico, Slovakia and the United States agreed that China's general aviation industry is ushering in a golden opportunity for development, and they said they expected to take advantage of the expo to promote further in-depth cooperation with China in relevant fields.

"I foresee that in the reform of the use of low air space, you can produce the expected results. This industry will develop greatly in China," said Carlos I. Giralt-Cabrales, Consul General of Mexico in Guangzhou.

Noting that China has excellent transport facilities, with a large number of airports and an advanced high-speed rail network, he said he sees flourishing prospects for the general aviation industry.

"Your (China's) general industry is very big and well-developed. The most important part is that it's still growing at a very fast pace," he added, "China will play a significant role in the industry."

Bell Helicopter from the United States brought to the fair the latest model of the Bell 407 series, and delivered a brand-new Bell 407GXi helicopter to Chinese customers at the exhibition site.

Mark Loh, general manager of Bell Helicopter's China service center, said the company was very optimistic about the Chinese market. At present, helicopters in China are mainly used in the fields of medical rescue and public safety, while China's development in related fields is constantly progressing, with large market demand and broad development prospects foreseeable.

He said that since general aviation aircraft and helicopters are mainly used for medical and emergency rescue purposes, the COVID-19 pandemic has had a relatively small impact on the industry.

"With vaccination campaigns conducted worldwide, we believe the market is getting back on track. We are very confident about our future in China," he said, adding that Bell will continue to increase its investment in areas like training and support services in China.

Favorable policies have been issued frequently, especially under the guidance of the CAAC's 14th Five-Year Plan, Shih noted, adding that emerging businesses like short-haul transport, entertainment and emergency rescue are growing rapidly.

"China's COVID-19 prevention results are very impressive. Recently, with the pandemic resurging repeatedly in other countries, air tourism has recovered completely in China. Everyone is free to travel. It brings great convenience to institutions like us." He is also amazed by the rapid development of domestic enterprises. "We can see the continuous innovation and development of Chinese enterprises from our partner companies."

Hunan is the first province to pilot the reform of low-altitude airspace management and it plans to build dozens of new airports within the year. Ivan Didanovic, representative of VRM company from Slovakia, said that means more pilots, crew members and other personnel will be needed badly. "We can provide them with our services to train personnel using simulated aircraft," he said.

Slovak Ambassador to China Duchamp Berra made a pitch for Slovak enterprises in the aviation industry at the opening ceremony. "I hope the expo will strengthen economic and trade cooperation between Chinese and foreign enterprises, including Slovakia." He said he hoped that an increasing number of Slovak and Chinese companies would begin cooperation projects in the aviation field.