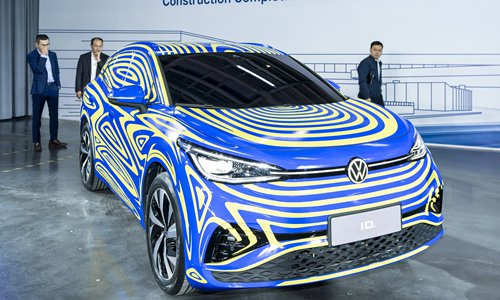 The first vehicle made by the joint venture of state-owned SAIC and German automaker Volkswagen rolls off a new assembly line on Friday in Shanghai. (Photo: VCG)

Overseas car companies are speeding up launches of new-energy vehicles (NEVs) for the Chinese market despite a decline of NEV sales in China in October, showing the irreplaceable place that the Chinese market holds in global NEV development, experts said on Tuesday.

The accelerated entry of overseas, high-end brands might breathe new life into China's NEV market, which lacks brand variety, especially when it comes to high quality, they said.

US electric car giant Tesla just launched its locally made Model 3 trial cars in Shanghai and will begin deliveries to local customers in January.

Tesla produced the cars in its Shanghai plant, which took less than 10 months to build, an astonishingly fast speed. Liu Yang, senior manager of Tesla's training department, attributed the speed partly to ample government support. Liu spoke during the debut of those trial cars on Friday.

NEV sales in China fell for the fourth month in a row in October, according to data released by the China Association of Automobile Manufacturers on Monday. In October, sales of NEVs including hybrids and fully electric cars sank 45.6 percent year-on-year.

The sales declines were mainly triggered by cuts in government subsidies for NEV companies, experts said. Affordability, due to multiple factors including subsidies and low-cost usage, has been a major motive behind Chinese customers' choice of NEVs.

China has given strong policy and subsidy support to both buyers and manufacturers of NEVs in China, but it changed the subsidy system around March. That limited the support to only a handful of top-performing NEV makers in the country.

Experts nevertheless said it's wise for foreign brands to accelerate their NEV layout in China which, despite fluctuations, remains the largest consumption market in the world for NEVs.

"Most of the world's NEVs are sold in China right now. There are uncertainties, but unless overseas companies want to miss the NEV market opportunities, they must strengthen input in the Chinese market," Lin Boqiang, director of the China Center for Energy Economics Research at Xiamen University, told the Global Times on Tuesday.

Wu said that NEVs are the direction of the future for the car industry. He also noted that the entry of overseas high-end brands might change domestic customers' impressions of NEVs and prompt them to spend more on those cars.