BUSINESS Overseas capital acts as a 'stabilizer' in China's A shares

Overseas capital acts as a 'stabilizer' in China's A shares

The A-share market has slowly changed in the past two years, shifting from a market that's entirely swayed by domestic capital to one where overseas capital has increasing influence, a veteran equity investor said on Tuesday. 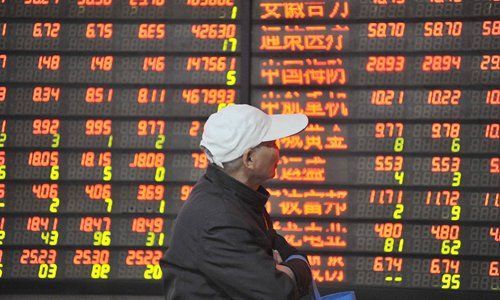 An investor watches market performance at a brokerage in Nanjing, East China's Jiangsu Province on Tuesday. (Photo and illustration: VCG)

"In the past, the A-share market was an isolated one where domestic liquidity decided stock valuations... Now, overseas capital is acting like a 'stabilizer' as most incoming capital is managed by institutional investors who have their own investment criteria," said Michelle Qi, chief investment officer (equities) for Eastspring Investment Management (Shanghai) Co.

Overseas capital is speeding up its allocation to A-share assets this year, a trend that has been an important force in the rebound in the Shanghai and Shenzhen markets, experts said.

The Shanghai Composite Index rose from 2,465 points at the beginning of this year to 3,054 points on Tuesday, while the Shenzhen Component Index rose from 7,149 points to 9,595 points.

Northbound capital through stock link programs had reached about 121 billion yuan ($18.06 billion) in the first two months of this year, according to the Shanghai Securities News on Tuesday.

In comparison, about 300 billion yuan worth of overseas capital flowed into A shares in 2018, according to Fang Xinghai, deputy head of the China Securities Regulatory Commission in January.

"The ongoing recovery of confidence on the two bourses is largely due to the inflow of overseas capital," Qi told the Global Times on Tuesday, adding that from what she had seen and experienced during recent road shows, overseas investors are becoming more and more interested in allocating A-share stocks, particularly as the MSCI is increasing the weight of A shares in part of its indices.

According to Qi, the logic behind this wave of stock investment by overseas capital has something to do with the low valuations of many A-share stocks. Also, the yuan's depreciation trend has faded as the Chinese government has displayed an inclination to stabilize the yuan, which means that overseas investors' stock yields in A shares won't be swayed too much by exchange-rate fluctuations.

"Actually, even a five percent yield on A-share investments would make overseas investors quite happy. They are relatively rational as to their expectations about such investment returns," Qi said.

Eastspring Investments did not disclose its recent capital movements in A-share markets, but it has disclosed a plan to launch the first private fund product focusing on A shares around mid-March.

Experts said that overseas investors' allocations to A shares will be a long-term trend.

Shao Yu, chief economist at Shanghai-based Oriental Securities, said that the capital inflows will be "continual" and on a "mid- to long-term basis."

Li Daxiao, chief economist at Shenzhen-based Yingda Securities, told the Global Times that it would be "a pity" if overseas investors neglect China's shares in their global assets allocation as China's economy continues to grow.