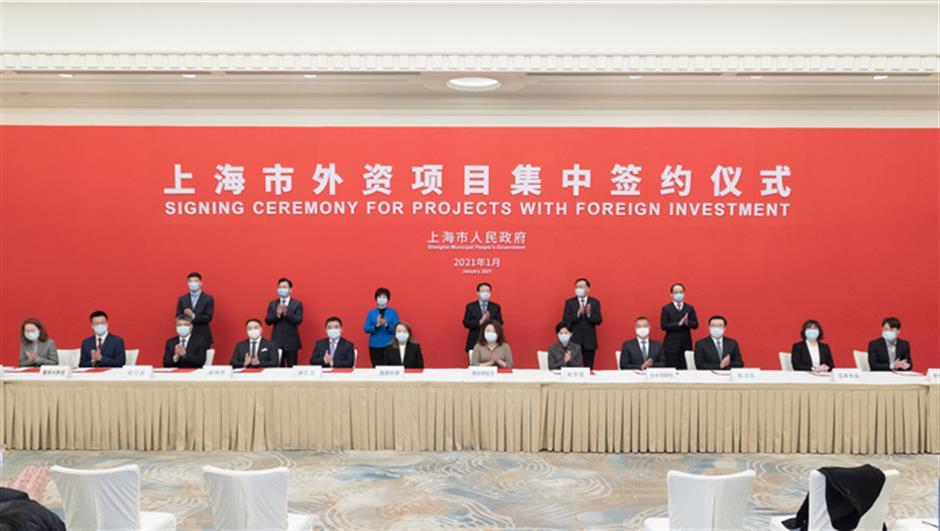 2021's first group of investment projects in Shanghai are worth US$11.85 billion.(Photo: agencies)

Shanghai consolidated its position as a top destination for the industrial chain layout of multinational companies, with a new group of 62 foreign investment projects signed today.

As the first batch of foreign investment projects inked in 2021, they attracted overseas capital totaling US$11.85 billion.

Twenty-nine of the projects received funding of more than US$100 million each, seven were from Global Fortune 500 companies and 20 were headquarters-related projects.

Danieli, one of the world’s top three manufacturers of plants and machines for the metals industry, announced it will locate its Chinese headquarters in Hongqiao area with a planned investment of around US$30 million.

“China has become the biggest market in the world for many industries, so companies have to develop products in China for Chinese consumers,” said Martino Francois David, chief executive officer of Danieli Metallurgical Equipment & Service China.

Italian pharmaceutical company Chiesi invested in Waigaoqiao FTZ in Pudong because “it's one of the most important free trade zones in the country,” according to company officials.

“With a local trading company set up, we'll be able to deliver our services to local customers in a faster and more efficient way, and contribute more to the local community through taxes paid and new job opportunities,” said Davide Dalle Fusine, general manager of Chiesi Pharmaceutical Shanghai.

By the end of 2020, the city was home to 771 regional headquarters and 481 research and development centers of multinational companies.