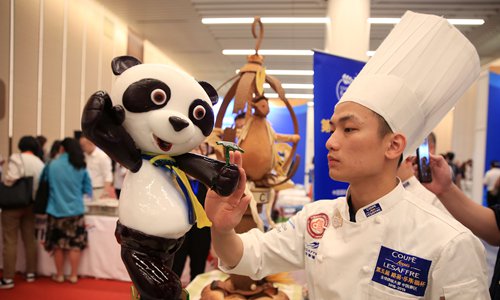 A view of the exhibitors and buyers matchmaking meeting for the second China International Import Expo held in the National Exhibition and Convention Center in Shanghai on Friday. (Photo: VCG)

More overseas companies are flocking to sign up for the second China International Import Expo (CIIE) after the success of the first showed the benefits they get from China's opening-up and greater exposure to China's market, representatives from many companies told the Global Times.

As the 100-day countdown began on Saturday for the second session of China's largest import expo, it is expected to surpass the first one in scale and attendance, organizers said.

In comparison, companies from more than 130 countries and regions attended the first CIIE's company exhibition.

More than 250 of the world's top 500 companies and industry leaders have signed up for the second CIIE, Wang said. The average exhibit area is about 93 square meters, up 20 percent compared with the first CIIE.

"The CIIE is a landmark project to push a new round of opening-up for China. It shows China's determination that its reform and opening-up will never stop," Wang said.

Tu Xinquan, dean of the China Institute for WTO Studies at the University of International Business and Economics in Beijing, told the Global Times on Sunday that the CIIE not only shows China's determination to balance trade, but acts as a stimulus to China's supply-side structural reform. It means that domestic manufacturers will be forced to increase their competence on a level playing field.

"It can be expected that the CIIE will be welcomed by overseas companies as it helps them broaden sales channels in the country," he said.

The second CIIE is scheduled to run from November 5-10 in Shanghai.

An exhibitors and buyers matchmaking meeting, held in the National Exhibition and Convention Center in Shanghai, was bustling with activity. Some food companies turned the hall into temporary kitchens with chefs cooking beef, making coffee and chopping bread to serve visitors.

Many exhibitors said that they had updated their exhibit plans for the second CIIE after receiving generous orders during the first CIIE.

Qiu Shurong, sales deputy general manager of New Zealand-based, Chinese-owned dairy products manufacturer TheLand, said that the CIIE provides the company opportunities to reach China's markets in smaller cities. He said that online sales of TheLand products surged 309 percent in the first quarter, which he attributed to the effects of the CIIE.

"This year, we are among the first batch of companies to sign up for the second CIIE, with an exhibition area 1.5 times larger than last year," he said.

"I feel that trade is becoming more and more convenient in China. As a trader we benefit from such increasing convenience and our confidence in the Chinese market is increasing," she said.

More companies from the US will attend the second CIIE than was the case for the first edition, Ministry of Commerce senior official Ren Hongbin said at the press conference.

"The Chinese market has great appeal to companies at home and abroad, including US companies. For the US, even if there is some friction on the bilateral side, it can't change the companies' attention to and great enthusiasm for the Chinese market," Ren said.

In 2018, more than 170 companies from the US attended the fair, with a total exhibition area of more than 36,000 square meters, which ranked among the top three groups of attendees by country.

This year, companies from the US are even more active and the number attending the fair will surpass last year's figure, with an exhibition area 35 percent larger than last year's, Ren said.

A PR representative from the US-based food manufacturer Mars said that Mars is very optimistic about the prospects of the Chinese market.

"We believe the current [trade] fluctuations are just temporary," she said during a pre-expo exhibitors and buyers matchmaking meeting.

She disclosed that Mars' exhibition area for this year's CIIE will be 30 percent larger than last year. The company will bring dozens of new products like sugar, chocolate, pet food and sauces to the second CIIE.