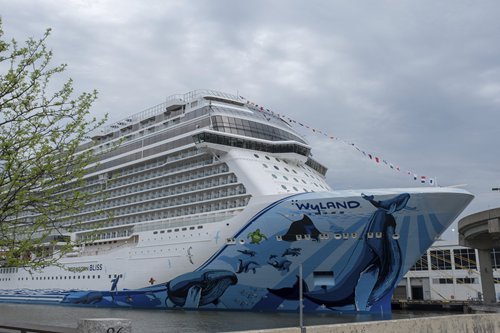 View of Norwegian Cruise Line's Norwegian Bliss in New York in May 2018. It arrived for a preview event where guests experienced the culinary offerings and award-winning Broadway entertainment at sea. File (photo: IC)

Some overseas cruise lines' decision to exit the Chinese market has more to do with their business errors than with Chinese customers or domestic market demand, tourism experts said on Thursday. The comments came after online posts blamed Chinese customers' personal behavior for certain overseas cruise lines' temporary exits from the Chinese market. According to the posts, Norwegian Cruise Line (NCL), a US-based cruise company, left the Chinese market because many middle-aged Chinese customers were wasting food on the vessel, imposing a burden on the cruise operator.NCL recently announced that its Norwegian Joy cruise liner will leave China in April 2019 for the waters of Alaska after sailing in China for just about one year. The ship will be replaced by another NCL vessel, Norwegian Spirit, which will sail seasonally in China starting from the summer of 2020. This means that the company's services will be absent from the Chinese market for about one year. Sapphire Princess, a cruise ship owned by Princess Cruises, exited the Chinese market in April 2017, according to media reports.  Experts said it's ridiculous to assume that any ship would be driven to failure just by customers' appetites. The underlying problem lies in the companies' mistakes in the Chinese market, as they tested the waters in China recent years. One mistake was that overseas cruise companies often hired Chinese travel agencies to be in charge of selling cruise tickets, which meant that travel agencies were eating into a big proportion of the profits, Wang Jianmin, a research fellow at the Tourism Research Center of the Chinese Academy of Social Sciences, told the Global Times on Thursday. "What's worse, the travel agencies often sell the cruise tickets at a relatively low price to Chinese customers, who should not be those cruise ships' target customers at all. These customers are unwilling to spend anything extra, which is an important part of cruise ships' income," Zhang Lingyun, director of the Tourism Development Academy at Beijing Union University, told the Global Times on Thursday. Data on Ctrip.com showed that a five-day trip on Norwegian Joy costs about 2,500 yuan ($360), which is not much considering the domestic tourism spending level. Wang also said that overseas cruise liners should not deploy overly large vessels, like the 3,883-passenger Norwegian Joy, as a smaller vessel will provide a sense of quality that will attract higher-class tourists in China. "Also, ships like Norwegian Joy overly appealed to Chinese customers with too many Chinese elements, like offering Malatang [a traditional spicy street food from Southwest China's Sichuan] on the ship. But many Chinese customers will abandon 'Western-style' travel if they can't find any Western elements at all," said Wang. Despite the departures, overall demand for cruises is still rising in China, experts stressed. "Temporary market fluctuations are normal," Zhang said. Outbound and inbound cruise passengers from 11 cruise ports in China rose 5.5 percent in the first eight months of this year, according to a report published by the China Cruise & Yacht Industry Association in mid-October. "The growth of the cruise industry has been stable in recent years, and I believe growth will continue to be steady in the future," according to Wang. Neverthless, he cautioned that political changes might be a problem for the sector. For example, deteriorating China-South Korea relations led to a halt in many cruises between the countries in recent years.