BUSINESS Overseas listing rules for Chinese firms to be revised

Overseas listing rules for Chinese firms to be revised 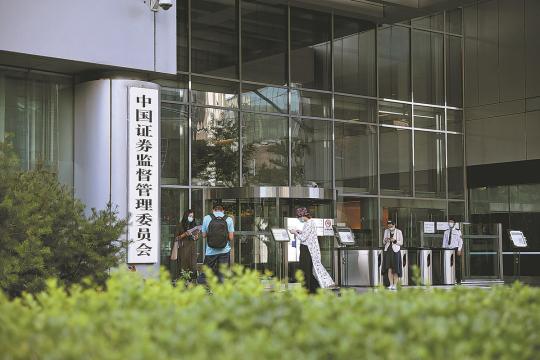 China has announced its plan to revise confidentiality rules for Chinese companies listing overseas, paving the way for China-U.S. cooperation on auditing supervision.

The draft rules, unveiled by the China Securities Regulatory Commission, the Ministry of Finance, the National Administration of State Secrets Protection and the National Archives Administration of China, marked the country's latest move to resolve differences and overcome problems for China-U.S. cooperation and keep the channel of overseas listings open, experts said on Sunday.

The regulatory commission said the revisions to the existing rules, which were last updated in 2009, will provide clearer guidelines for confidentiality and archives management for overseas listings. It will also facilitate cross-border regulatory cooperation, including joint inspections, which will safeguard the rights and interests of global investors.

The draft rules, which have been put online until April 17 for public input, have scrapped a requirement that on-site inspections related to overseas-listed Chinese companies should be mainly conducted by Chinese regulators or rely on their inspection results.

Experts said the changes will help remove hurdles to China-U.S. cooperation on audit oversight that may prevent some U.S.-listed Chinese companies from being delisted over the next two years.

Dong Dengxin, director of the Finance and Securities Institute, which is part of the Wuhan University of Science and Technology, said the changes are in accordance with international practices. They also showcase the country's strong determination to expand opening-up and offer an institutional response to resolving the dispute, which threatened U.S.-listed Chinese companies with delisting.

The revision comes amid a long-running dispute between China and the U.S. over audit oversight. The U.S. Holding Foreign Companies Accountable Act, passed in 2020, allows the U.S. Securities and Exchange Commission to delist Chinese companies from U.S. exchanges if they are found to have not complied with audit requirements of the Public Company Accounting Oversight Board for three consecutive years.

Dai Guanchun, a partner at Jingtian& Gongcheng, a law firm based in Beijing, said the SEC has named specific U.S.-listed Chinese stocks that could be removed from U.S. stock markets for failing to adhere to the foreign companies accountability act. This significantly impacts market confidence as well as the listing of Chinese tech companies in the U.S..

Dai said while the change in the draft rules may pave the way for solving the audit disputes, more efforts are also needed to guide intermediary agencies such as accounting firms to cooperate with regulatory bodies and update the China-U.S. regulatory cooperation mechanism.

According to the draft rules, overseas regulators' investigations in China should be carried out through the cross-border regulatory cooperation mechanism. The China Securities Regulatory Commission and other related departments should provide necessary assistance in accordance with the bilateral and multilateral cooperation mechanism.

U.S. Securities and Exchange Commission Chairman Gary Gensler said in an interview with Bloomberg on Tuesday that there have been "considerate, respectful and productive conversations" between Chinese and U.S. authorities.

CSRC Chairman Yi Huiman has held three video conferences with Gensler since August last year, aiming to solve problems related to audit and supervision cooperation between China and the U.S..

The two sides will continue to communicate, but the outcome of their efforts will be determined by the "wisdom and original intentions" of both parties, said the CSRC.