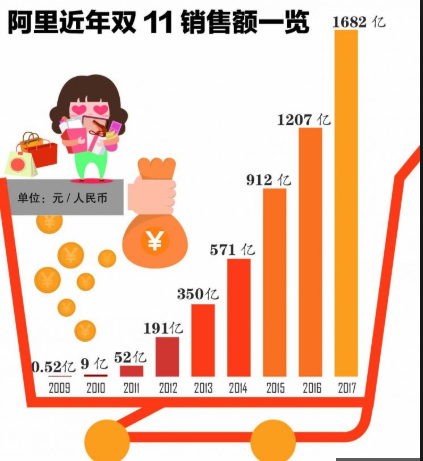 HANGZHOU, Nov. 12 (Xinhua) -- On the back of strong consumer spending in China, Alibaba has reported record Singles' Day sales, which is good news for overseas sellers who recently joined the shopping festival.

Total sales on its platforms including Tmall and Taobao represented an annual increase of about 27 percent from 168.2 billion yuan a year ago, Alibaba said.

Alibaba launched the annual online shopping promotion on Nov. 11, 2009, a day celebrated by many young Chinese people as Singles' Day. Over the years, its rivals have also joined the shopping spree.

Sales of Tmall's first shopping festival totaled about 52 million yuan and the figure has been growing ever since, as more and more consumers turn to online shopping.

"The increasing sales reflect the huge potential of China's online consumption," said Zhu Keli, a researcher on new economy with the Development Research Center of the State Council.

Overseas brands are becoming the new winners of the popular shopping festival, as more Chinese consumers demanded imported products over the years.

Tmall Global, a cross-border e-commerce platform, saw sales exceed that of a year ago in just about 6.5 hours, exemplifying Chinese consumers' strong demand for imported products.

Eyeing China's huge market and consumption upgrading, more than 19,000 overseas brands from 75 countries and regions participated in this year's online shopping spree, according to Alibaba.

"We have taken part in Singles' Day sales for four years. Our sales exceeded 100 million yuan in no more than seven hours this year," said Nancy Jian, chief operating officer for the China division of Chemist Warehouse.

The Australian pharmacy has been using Tmall Global to cash in on the burgeoning demand for Australia's complementary medicines in China.

"Over the years, I have been buying more quality healthcare, as well as maternal and child products. And e-commerce sites and their offline stores are offering more options," said Hu Feifei, a resident of Huzhou, east China's Zhejiang Province.

Hu said her consumption habits have not only affected her family, but also represented a new trend among many colleagues and friends.

"Data we have on the China International Import Expo (CIIE) and the Singles' Day shopping festival could help us adjust product lines and offer a reference on where to open brick-and-mortar stores," said Jian, whose company also participated in the first CIIE in Shanghai that closed on Saturday.

Alibaba announced at the CIIE last week that it would use its e-commerce platforms to bring 200 billion dollars worth of products into China over the next five years, a move that will help imports become a new driving force of China's consumption upgrading and benefit the world's industrial chain.

"In the future, China will shift to attach equal importance to exports and imports and this is the way to achieve high-quality economic growth while continuing to bring dividends to the world," Zhu added.