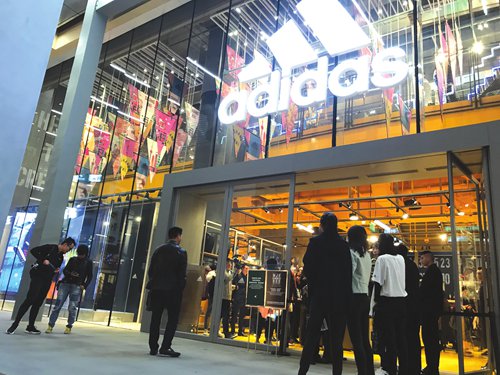 Overseas sports brands are enjoying a golden age in China with the country's rapidly burgeoning sports sector fueling their business.On Wednesday, German sporting goods company adidas opened a new brand center, similar in size to a flagship store, in a shopping mall on Shanghai's Nanjing East Road, a major shopping street. The three-story store, decorated in a cool metallic style, also contains a 4D training ground, a running lab and a large digital screen which makes it look more like a trendy gymnasium than a shopping venue. After entering China only 21 years ago, the brand has seen success with rapid expansion, with more than 11,000 retail outlets, including direct-sales stores and franchises across China. It is also expanding its operations in China, with some 1,000 new store openings each year, said Senior Director of Retail Expansion Strategy for Adidas China James Grigsby at the brand center launch. Adidas saw a year-on-year sales growth of 29 percent in 2017 in China. It also saw sales grow by 26 percent on an annual basis in the third quarter this year, Grigsby told the Global Times. Adidas's rise in China is a reflection of how the Chinese market is offering golden opportunities for overseas sport sbrands. Decathlon, a France-based sporting goods and equipment retailer, had 267 stores in China by the end of 2017, compared with just 69 stores at the end of 2013, according to statistics in a report on ifeng.com.  These overseas sports brands are managing to flourish at a time when many overseas brands are having a difficult time with Chinese consumers, for reasons such as the country's economic downward pressure, the rise of fiercer competition from domestic brands, as well as the harsher global trade environment.  For example, US jewelry brand Tiffany & Co reported quarterly sales that missed estimates as tourists from the Chinese mainland spent less than expected at the jeweler's stores in the US as well as in Hong Kong, Reuters reported on Thursday. In recent years, several British fashion brands have also left the Mainland market after testing the waters for some time, including Marks & Spencer and Next. Spending more on sportsThe rapid growth of overseas sports brands in China has been spurred by the trend of increased spending on sporting goods, whether sportswear and active wear, fitness facilities or products like protein powers for body builders.  A resident in Beijing surnamed Chen, who did not want his full name used, said his spending on sporting goods has grown a lot in the past few years.  "In 2000, I bought my first item of outdoor equipment - a tent. Gradually I started buying other outdoor gear like clothes, shoes, professional watches, socks and so forth," he told the Global Times on Wednesday.Chen said he is spending more and more on sports products as he pursues more outdoor hobbies like diving, kayaking and paragliding. "I bought a kayak… that cost me 4,000 yuan. I also go scuba diving from time to time, and it costs 300-800 yuan each time," he said.  A fitness fan surnamed Ze, who works in the internet industry, told the Global Times she spent around 58,000 yuan last year on sports products and services, including paying for lessons from private coaches, gym fees, tickets to attend sports competitions, spending on sports camps as well as on fitness facilities and clothes. "My spending on sports products and services has exploded in recent years, but I think it'll pay off. I'll probably spend even more on these events and sports gear in the future," she said.  Top-tier brands

The rise of spending on sports products has pushed the development of China's sports economy. According to statistics released by the National Bureau of Statistics in January, China's sports industry had a total output of 1.9 trillion yuan in 2016, up 11.1 percent on an annual basis. "This is also a kind of consumption upgrade, in which people are shopping for a new type of lifestyle," said He Wenyi, deputy director of the National Sports Industry Research Base under Peking University. "And since this type of sporting lifestyle is becoming established, sports consumption will continue in the long term, which means that China's sports economy has very bright prospects," He told the Global Times on Thursday. Statistics from the data portal statista.com shows that China's sports industry market will likely reach about $194 billion by the end of 2020 and $470.3 billion by the end of 2025. He also pointed out that the sports economy is burgeoning in China under government support. "Encouraging the sports industry stimulates consumption that will contribute to GDP, and it saves on medical costs and medical insurance expenditure as people have better health," he noted. According to He, overseas brands are very lucky that they are already in a dominant position in the China market over domestic brands, as consumers immediately think of buying overseas brands if they are looking for professional, high-quality sports products, although domestic brands are catching up quickly on the quality side. Grigsby said that he is encouraged to see the rising competition in sports retailing as this shows that the "pie is getting larger" in the country. Upgrading manufacturing

But experts have also cautioned that sporting goods sellers, whether they be overseas or domestic, should bear in mind that the future only belongs to those ­­who can update their sales and manufacturing model along with consumers' changing habits. "For example, they should attach more importance to online sales channels than to offline stores. They should also update their manufacturing assembly lines, like using artificial intelligence," Ye Hang, an economics professor with the College of Economics at Zhejiang University, told the Global Times Thursday, adding that brands should also frequently change their product design to appeal to customers' changing appetites. "A traditional sales and production model means they will be constrained by higher costs. I don't think they can go a long way even with the rising trend of sports consumption in China," Ye said.