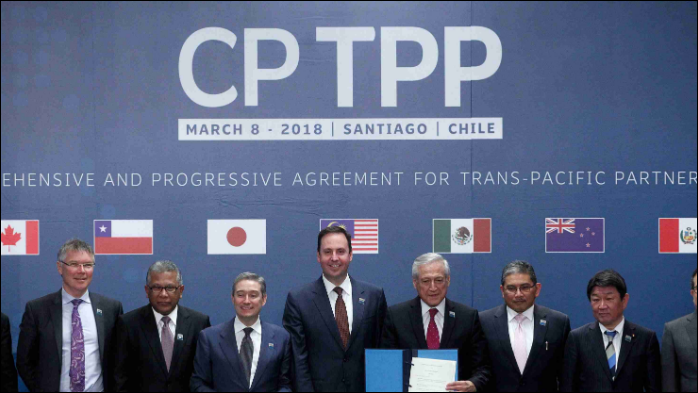 A landmark 11-country trade deal, a revamped version of the Trans-Pacific Partnership (TPP), came into force on Sunday with New Zealand’s trade minister hailing the opportunities it presented for exporters.

The deal, which will slash tariffs across much of the Asia-Pacific region, does not include the United States after Washington pulled out of the TPP negotiations in 2017.

“The CPTPP has the potential to deliver an estimated 222 million New Zealand dollars (149.01 million U.S. dollars) of tariff savings to New Zealand exporters annually once it is fully in force.”

The pact came into effect on Sunday for Australia, New Zealand, Canada, Japan, Mexico and Singapore, with Vietnam to follow on January 14, Australia's Department of Foreign Affairs and Trade said on its website.

Brunei, Chile, Malaysia and Peru will begin 60 days after they complete their ratification process.

Investment bank HSBC said in a press release that 90 percent of tariffs on goods in the first six countries were removed on Sunday in the first round of cuts.

Australia is looking forward to favorable conditions for its agricultural exports including wheat, prompting U.S. competitors to warn they will be needing help to compete.

“Japan is generally a market where we seek to maintain our strong 53 percent market share, but today we face imminent collapse,” U.S. Wheat Associates President Vince Peterson told a public hearing in Washington on December 10.

“In very real terms, as of April 1, 2019, U.S. wheat will face a 40 cent per bushel, or 14 U.S. dollars per metric ton, resale price disadvantage to Australia and Canada,” Peterson said, according to a transcript on the U.S. Wheat Associates website.

The deal will reduce tariffs in economies that together amount to more than 13 percent of global GDP – a total of 10 trillion U.S. dollars. If the United States were included, it would have represented 40 percent.

U.S. President Donald Trump said in April that he would consider rejoining the trade agreement if the terms were more favorable to the United States.

"The deal was terrible, the way it was structured was terrible. If we did a substantially better deal, I would be open to TPP," he claimed in an interview with CNBC in January.

Most countries of CPTPP welcomed the possibility but Japan did not favor a renegotiation.

“The 11 participating countries share the thinking that it would be extremely difficult to take out part of the TPP and renegotiate or change it,” Toshimitsu Motegi, Japan's minister in charge of the TPP, said in April, according to Kyodo News.

In addition to CPTPP, another regional trade cooperation Regional Comprehensive Economic Partnership (RCEP), which covers about 3.5 billion people in 16 nations, including China, and accounts for a third of the world's gross domestic product, is in its final stage of negotiation.

However, the ASEAN-led initiative failed to sign the deal this year as expected. Officials from China's Ministry of Commerce said on December 22 that 80 percent of negotiations has been finished so far.