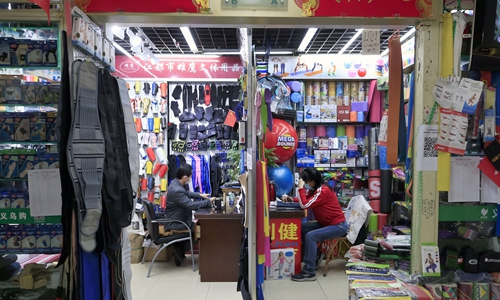 Shops were open but had few if any customers on Tuesday at the Yiwu International Trade City, China's largest small commodity export market,as the global spread of the coronavirus stopped overseas customers from buying Chinese goods. (Photo: Global Times)

Some entrepreneurs in China's manufacturing hub Yiwu, the world's largest trading center for daily consumer goods in East China's Zhejiang Province, are facing their darkest moment in years, as the global spread of coronavirus is hitting their export orders. The impact could be harsher than previous crises like the China-US trade war.

Yiwu's struggle offers a dim picture of China's overall exports, which some economists predicted may fall 10 percent this year, as China's major overseas markets like Europe and the US are hit by the global spread of the coronavirus.

In Yiwu's largest market, the Yiwu International Trade City, which was often bustling with overseas customers, shops were quiet on Tuesday. In sections for the sports/stationery products, the Global Times seldom saw any customers all morning.

Li Lan, who has a booth in the Yiwu International Trade City selling flags, said that export orders in March were only 20 percent of those last year. That's unusual because March is usually a busy season for her products.

"We used to have customers coming whenever we were open. Now there are very few, not even those asking about prices," she told the Global Times.

The decline in US and European customers was a major reason for slack business, as about 40 percent of Li's exports formerly went to the US, while 40 percent went to Europe.

"Things are getting worse…we still had some orders from European and US customers in February, but it was gone now," she said.

She added that things were not so difficult for her during the trade war, when she didn't see orders or prices changing much in response to tariffs.

"But now, with 500 workers to pay and roughly no new orders, I am losing money," he said, adding that his company saw orders and revenues slump 30 percent after the Spring Festival holiday.

US and European orders are plummeting as they are taking some of the hardest blows from the pandemic. As of press time, the virus had infected more than 43,000 people in the US.  Overall, more than 380,000 people in 189 countries and regions were infected.

Entrepreneurs like Li Lan don't have much hope of a rebound. She has lost more than 100,000 yuan ($14,130) since the Spring Festival  and with the current cash flow, her seven-year-old shop might collapse if things don't get better.

In January and February, Yiwu's exports slumped  22.54 percent to about 34.9 billion yuan, but imports increased 26.65 percent, according to data sent by the Yiwu Bureau of Commerce to the Global Times. Yiwu is a barometer of China's export .

Exports slumped 17.2 percent on a yearly basis in US dollar terms in the first two months this year, customs data showed.

"I am far from being optimistic about China's exports this year and the yearly fall could surge by10 percent as some of China's largest exports markets like Japan and the US are hit hard," said Zhang Yansheng, chief research fellow with the China Center for International Economic Exchanges.

But Pang Chaoran, an associate research fellow at the Chinese Academy of International Trade and Economic Cooperation, said that overseas demand should "warm up" in the second half of this year, after the coronavirus is contained around the world.

"I think exports are just suppressed in the short term, but the appeal of made-in-China products has not been changed by the virus," Pang told the Global Times.