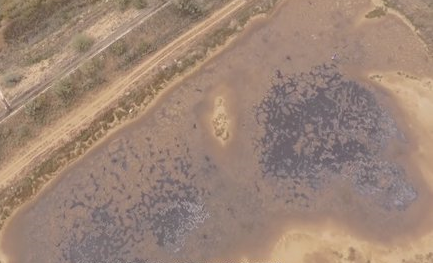 The polluted area in the Tengger Desert. (Photo: A screenshot of thepaper.cn)

Authorities in Northwest China is investigating a local paper company that had discharged waste into the Tengger Desert, one of China's largest deserts, and covered the case for 20 years due to unclear administrative jurisdiction.

The government of the Zhongwei city, Ningxia Hui Autonomous Region, announced on its website that, from October 21 to November 10, they had cleared 527,000 tons of black solid waste discharged by the Zhongwei Meili paper company.

A local police officer involved in the case surnamed Qin told the Global Times on Monday that they have not yet finished clearing the desert.

Test results show that the level of pH, cyanide and heavy metals in the polluted area has not reached a dangerous standard, but it is still unclear if underground water has been affected, thepaper.cn reported, citing an environmental official.

Luo Yameng, a Beijing-based environment protection and eco-city expert, told the Global Times on Monday that if sewage seeps into the ground, it will threaten people's health, and it is almost impossible to recover once the waste water pollutes the underground water.

The pollutants were discharged by the Meilin company between 1998 and 2004. They were produced during the paper making process, thepaper.cn reported.

The company built two waste water processing systems between 2002 and 2004 but continued to discharge waste into the desert until its pulping production line was closed in 2015.

Although the company is registered in Ningxia, the waste was discharged in the adjacent Alxa Left Banner in North China's Inner Mongolia Autonomous Region, which is why the pollution remained undiscovered for nearly 20 years until some volunteers revealed it to the media recently.

Zhongwei authorities are in charge of the investigation and cooperating with Alxa Left Banner authorities, Qin said.

Although the pollution had passed for many years, the company still deserves severe punishment as it committed an intentional crime, Luo said, noting that Ningxia authorities should also investigate to find out if any official helped the company cover up or neglect the pollution.

Luo called for a ban on establishing polluting companies in desertification areas and regions close to reserves, as the purification capacity of the desert is weak.