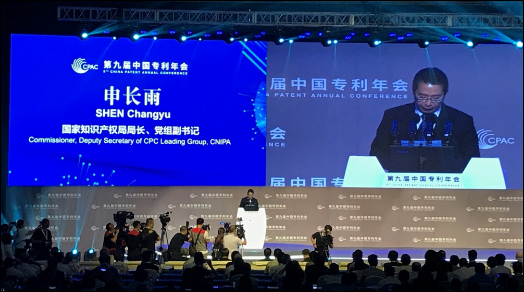 Government leaders and industry experts from more than 30 countries gathered at the China Patent Annual Conference in Beijing on Thursday to share plans for the future of intellectual property (IP) development.

Most results over the past decade have shown progress nationally. The number of international applications filed under China's Patent Cooperation Treaty continues to grow, ranking second worldwide for 2017.

"China has a reason to have the largest patent office, largest trade market office, largest design office in the world, with the extraordinary support from the state leadership," said Francis Gurry, director general of the WIPO.

Officials at the Conference said the nation has made great strides in enhancing IP protection.

"China's intellectual property usage fees of imports and exports show a simultaneous and rapid growth, with exports increasing by over 60 percent and imports by over 50 percent comparing with the previous year," said Shen Changyu, commissioner and deputy secretary of the CPC Leading Group, CNIPA.

Some expressed hopeful expectations over the future of China's IP protection.

"When we think about it on a deeper level, we would really hope for stronger protection of trade secrets to enforce our rights. We would also like to see higher compensations in patent entrenchment proceedings," said Udo Meyer, senior vice president of the BASF, AG.

Commissioner Shen Changyu told the meeting that China will unwaveringly play the role of defender, participant and active builder of international rules on intellectual property rights. He added that the nation will protect legitimate IP rights of domestic and foreign enterprises according to law, thus helping China to further open up.