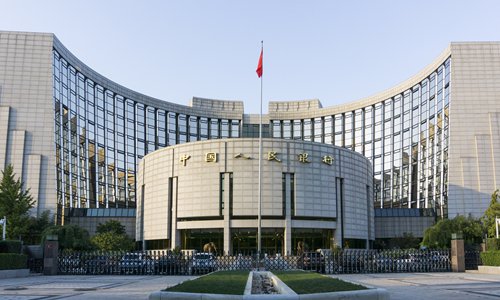 The headquarters of the People's Bank of China in Beijing. (Photo: IC)

China's central bank has pledged to boost research and development (R&D) into a fiat digital currency, a decision that may accelerate the issuance of the country's official digital currency, which insiders said might also be the first in the world.

The People's Bank of China (PBC) made the statement after a 2020 national currency, gold and silver teleconference held on Friday. The comment came as the safety of currencies has been given increased attention amid the COVID-19 pandemic.

Insiders said the pledge from the top level is in line with China's schedule to develop such a currency. The nation is already ahead of most countries in this area, and the PBC statement may mean that the pace of work will be further accelerated as the COVID-19 pandemic has made demand for such a currency more pressing.

An anticipated pilot project among major state-owned commercial banks like the Industrial and Commercial Bank of China may be launched soon, media reports said, citing insiders.

Over a year's development, R&D into the digital currency has reached a relatively mature stage, and it's time to accelerate the effort amid similar drives in other countries such as the US, as well as pressing demand in China itself, Cao Yan, managing director of the Digital Renaissance Foundation, told the Global Times on Tuesday.

"The launch of the digital currency could boost the recovery of China's economy more efficiently, both at the monetary and fiscal levels," Cao said.

For instance, the technology could support nationwide distribution of digital consumption coupons and achieve a more specific effect in targeted sectors, Cao explained.

Currently, authorities at the city or provincial levels are working with internet companies such as Alibaba and Tencent in distributing coupons.

Shares listed in the Chinese mainland relevant to digital currencies strengthened in the wake of the meeting.

Shares of Julong Co, a currency security operations provider based in Northeast China's Liaoning Province, surged by the daily limit of 10 percent to 9.22 yuan ($1.30) as of close on Tuesday. Shenzhen-based fintech incubator Forms Syntron also rose by the daily limit to 33.75 yuan.

Insiders told the Global Times previously that the PBC, in collaboration with private companies, has completed development of the sovereign digital currency's basic function and is drafting laws to pave the way for its circulation.