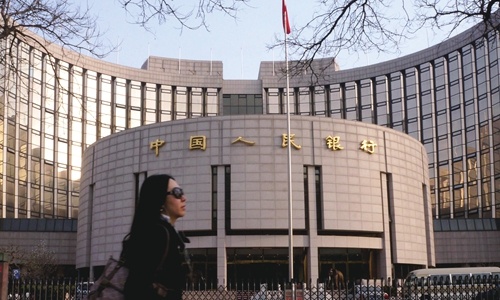 The building of the People’s Bank of China in Beijing (Photo: VCG)

The People’s Bank of China (PBOC) said in an announcement on Thursday that it issued 5 billion yuan ($772.5 million) in six-month bills in Hong Kong that received bids of 27.2 billion yuan, 5.4 times the issue volume, as yuan-denominated assets gain traction among foreign investors.

This issuance was widely welcomed by foreign investors, including banks in the US, Europe and Asia, as well as international financial organizations, which shows the confidence of global investors in China's economy, the announcement said.

The PBOC said that the regular issuance of RMB bills in Hong Kong not only enriches the yuan investment product series in the Hong Kong market, but also boosts the offshore issuance of yuan-denominated bonds.

In recent years, the number of yuan-denominated treasury bonds, financial bonds and corporate bonds issued in the offshore market has been on the rise with more diversified approaches and locations, showing that Hong Kong has played a positive role in promoting the development of the RMB market, according to the PBOC.