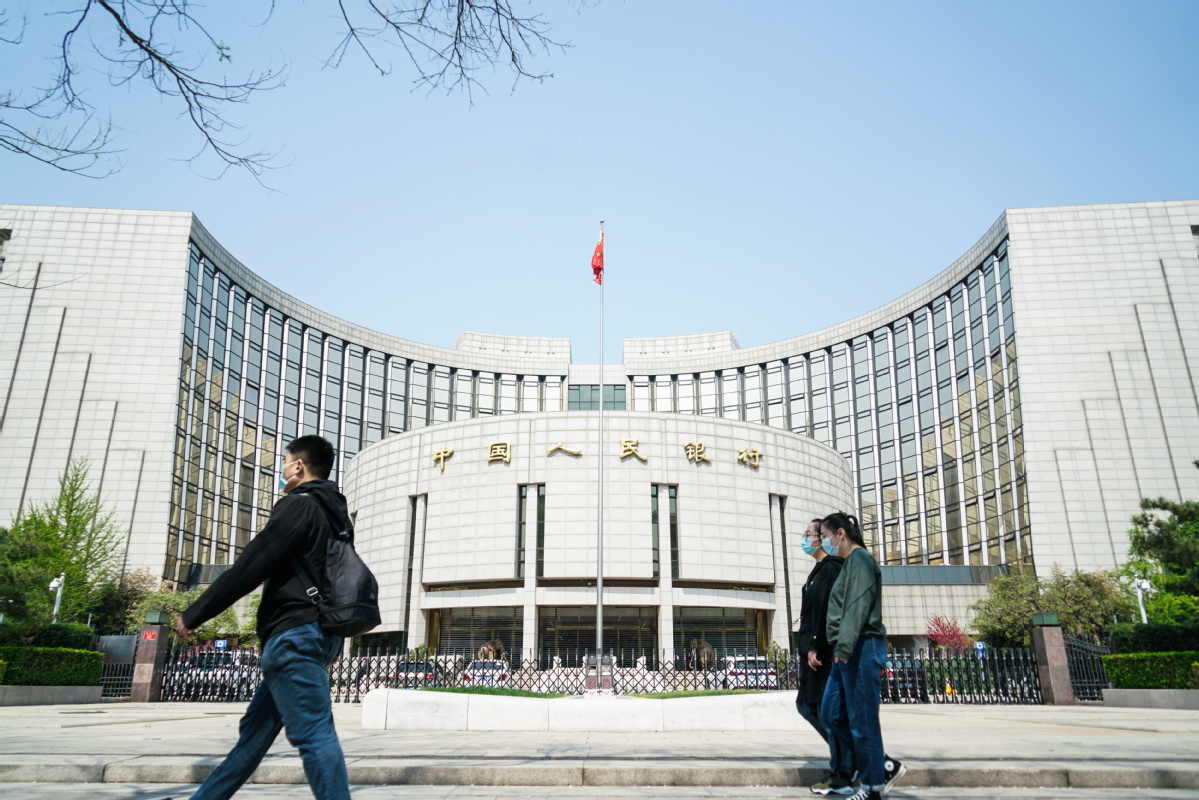 Pedestrians pass the headquarters of the People's Bank of China in Beijing. (Photo: China Daily)

China's monetary policy will ensure sufficient liquidity in the financial sector and stabilize support for the real economy, leading to a gradual decrease of the overall financing costs for small and micro enterprises, according to central bank officials.

Key indicators in March showed a slower growth of total social financing and credit over the first two months of the year. The year-on-year growth in outstanding yuan loans stood at 12.6 percent in March, compared with 12.9 percent in February, the People's Bank of China, the central bank, said on Monday.

Newly added social financing, a measurement of funds that individuals and nonfinancial firms receive from the financial system, came in at 10.24 trillion yuan in the first quarter, down 873 billion yuan from the same period a year ago, the PBOC said.

The central bank said that the year-on-year growth of M2, a broad measure of money supply that covers cash in circulation and all deposits, reached 9.4 percent by March, down from the 10.1 percent recorded at the end of February.

The central bank has also decided to extend the deferred debt service policy to the end of this year to alleviate repayment pressures on small and micro enterprises, while saving jobs. The measure will also help commercial banks to better manage their nonperforming loan risks, said Sun.

The so-called "cross-cycle adjustment" was first mentioned in the PBOC's first-quarter monetary policy report, which replaced the words "countercyclical adjustment", to describe hedging economic downside risks. "Whether the policy can help achieve a cross-cycle balance is very important, such as dealing with debt growth," said Wu Ge, chief economist at Changjiang Securities.

China's interest rates are floating within a positive range, or at the "normal stance", but some moderate adjustments are necessary for certain extreme situations, in line with the changes in international financial conditions, said Wu.

Globally, as some major economies are keeping the policy rates near zero, most of the monetary policy theories and practices are ending up in "no man's land". Changes in the United States Federal Reserve's monetary policy framework have also fueled expectations of re-inflation. "Maybe we should turn on the night light, slow down the speed a little bit, and take further steps after we see things clearly," he said.

In contrast, China has taken monetary actions in a relatively restrained manner during COVID-19. In terms of asset prices, which are influenced by the monetary policy, Wu said the current level in China is "so far, so good", which is still under control.

The PBOC will pay attention to other influences on the fiscal policy, such as the issue of treasury bonds and local government bonds this month, as the impact of the fiscal factors has been increasing in the short term, said Sun.

"We have included the fiscal factors into the framework of liquidity analysis, and the issue of local government bonds may accelerate in the coming months," Sun said. The central bank will "keep a close eye "on fiscal revenue and expenditure, as well as changes in the market liquidity, to provide a sound environment for government bond issuances by using various policy tools.

"But the PBOC may show little urgency in delivering net injections via open market operations, because the key money-market rates are suppressed for now," said Chiu.