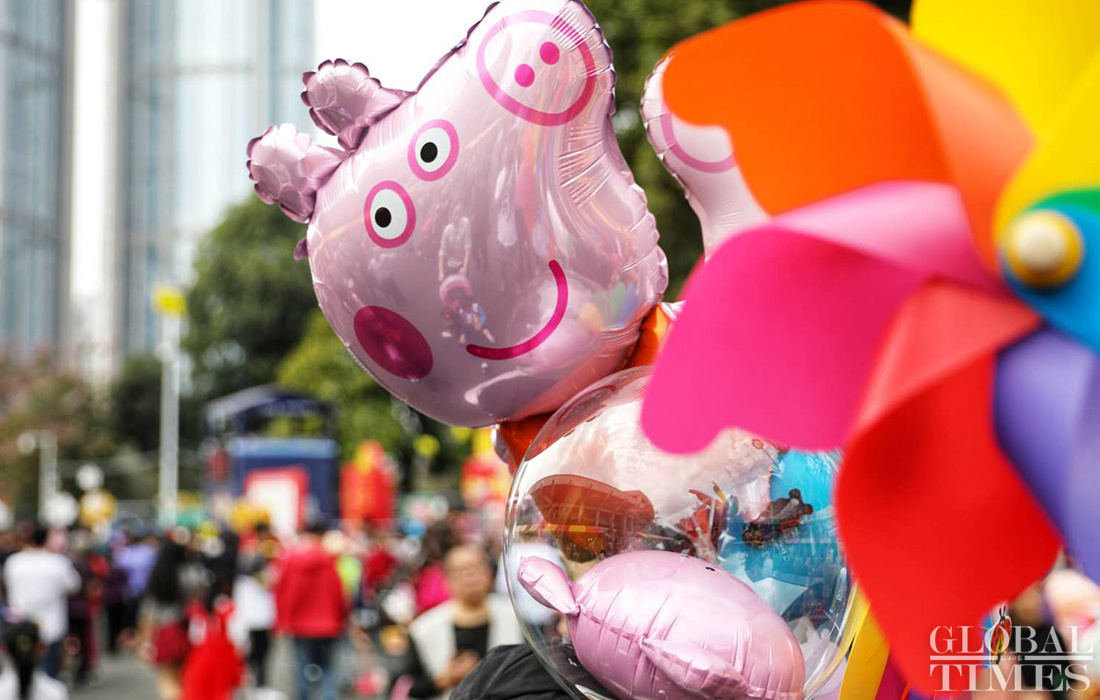 A "Peppa Pig" balloon is on sale (Photo: Global Times)

A defendant was ordered to pay 30,000 yuan ($4,613) over Entertainment One UK Ltd (eOne)'s losses for Peppa Pig trademark infringement, with Peppa Pig having been declared a well-known trademark in China, according to Shanghai Intellectual Property Court on Thursday.

The defendant surnamed Chen listed their products (LED lamps) sold online using the term "Peppa Pig" in addition to adding the name on the products' packaging.

The brand owner eOne claimed that the company used the brand "Peppa Pig" in the public domain for an extended period; therefore, the brand had garnered a high degree of reputation among children around the world.

The court, having found the brand Peppa Pig met the requirements for recognition of well-known trademarks as provided for by law, made a verdict that the defendant had infringed on their trademark; related products have been sealed accordingly.

China has always been transparent and impartial when dealing with IP disputes, Chang Yachun, a lawyer specializing in IPR issues at Beijing Kangda Law Firm, told the Global Times on Thursday. "No matter whether it's a foreign or domestic company, legal evidence plays an important role in judgments."

In this case, the Peppa Pig owner will be protected under trademark law after the trademark is recognized as a well-known one in China, Chang noted.

It is not the first time that the brand has been confronted with IP infringement in China. As early as in January 2020, a court in East China's Jiangxi Province ordered a copyright infringer to pay 30,000 yuan in compensation for losses of Peppa Pig's British creator. The infringer took advantage of the brand's popularity to increase the sales of unauthorized toys.

eOne said that the Peppa Pig cartoon was produced by the company in 2003, which became popular around the world after its premiere. After authorization, Chinese media and video platforms including China Central Television, iQiyi and Tencent all show the cartoon series. eOne has authorized its related products to 17 domestic companies covering electronic products, toys, clothing, mother and baby related products and food.