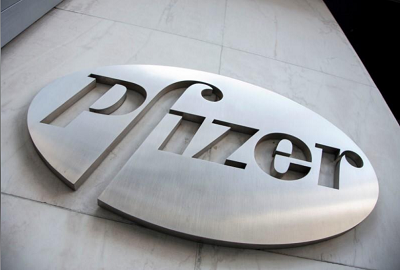 The Pfizer logo is seen at their world headquarters in New York April 28, 2014. (File Photo: Reuters)

Pfizer shares, which have struggled to benefit from the surge in stock market prices since Donald Trump’s election in 2016, dipped just over 1 percent in response to the results.

The company said that Ibrance had raked in sales of $933 million in the first quarter, up 37.4 percent from a year earlier but missing analysts’ estimates of $956.6 million, according to Thomson Reuters I/B/E/S.

Xeljanz, which is approved to treat rheumatoid arthritis and psoriatic arthritis, posted sales of $326 million, well below $398.5 million expected by analysts.

Pfizer, which is exploring options for a consumer healthcare business that some estimates value at $20 billion, said it expected to make a decision in 2018 on any sale of a business which includes Centrum vitamins and Advil painkillers.

The company holds a conference call with analysts at 10 a.m. eastern time to discuss the results.