Pacific Gas and Electric will be able to avoid two legal obstacles that could have tripped up its efforts to bounce back from bankruptcy if California Gov. Gavin Newsom and a federal judge approve a $13.5 billion settlement with victims of catastrophic fires blamed on the utility’s equipment. 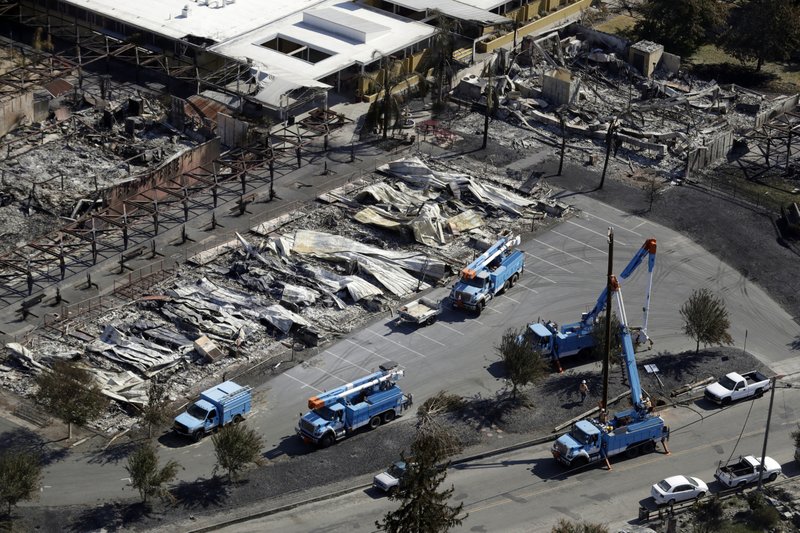 In this Oct. 14, 2017, file photo, Pacific Gas &amp; Electric crews work on restoring power lines in a fire ravaged neighborhood in an aerial view in the aftermath of a wildfire in Santa Rosa, Calif. (Photo by AP)

The company provided a clearer picture of its remaining bankruptcy path in a Monday regulatory filing that provided more details about the deal.

The settlement will allow Pacific Gas and Electric to skip a January civil trial to determine whether the company was liable for a 2017 Northern California wine country fire that killed 22. It also would cancel plans for a federal court hearing that was supposed to estimate the company’s total bill for all the fires tied to its power systems from 2015 through 2018.

Facing potential damages of up to $30 billion, PG&E filed for bankruptcy last January.

If a judge had deemed the liabilities much higher in a trial, Pacific Gas and Electric could have been rendered insolvent — a result that would have blown up its plan to reorganize its finances and resume normal business operations after emerging from bankruptcy protection next summer.

“This is exciting news for PG&E. They didn’t want to have anything to do with going before a jury,” said Jared Ellias, a professor with the University of California Hastings College of the Law who has been closely following the utility’s bankruptcy case.

For now, both the state and federal court hearings are hold and are supposed to be shelved entirely, as long as the settlement with the fire victims gets the required approvals within the next two weeks.

Newsom has until this Friday to sign off on the settlement, which meets his demands to substantially raise the $7.5 billion that Pacific Gas and Electric had previously earmarked for fire victims. U.S. Bankruptcy Court Judge Dennis Montali has until Dec. 20.

The governor’s office said Newsom is reviewing the settlement to ensure it meets his goal of treating both the fire victims and Pacific Gas and Electric employees fairly while also putting the utility on more stable financial footing to make the extensive upgrades to its grid in the future.

Pacific Gas and Electric had no immediate comment Monday, and the utility confined its comment to the explanation its filing with the Securities and Exchange Commission. A lawyer representing the bankruptcy committee for fire victims didn’t respond to request for comment Monday.

The deal with the fire victims will make it easier for Pacific Gas and Electric to meet a June 30 deadline set by California to get out of bankruptcy to it can be partially protected from future fire losses by a special fund set up by the state.

But it still isn’t all smooth sailing for the nation’s largest utility. The San Francisco company still must defeat a competing plan for its reorganization submitted a group of bondholders. The proposal lost its previous support from fire victims as part of the $13.5 billion settlement.

The company also is still awaiting Montali’s approval for a separate $11 billion settlement with 110 insurers who have already paid policyholder claims in the fire. That deal faced fierce resistance from fire victims who feared it would drain PG&E of all its cash, leaving them in the lurch or forced to accept nothing but stock in a company that could be worthless.

The new deal with fire victims calls for Pacific Gas and Electric to pay them $6.75 billion in cash, staggered in installments that will begin with the settlement’s approval and continue through January 2022. The remaining $6.75 billion will consist of stock in the reorganized company, giving fire victims a nearly 21% stake in the utility, according to Monday’s filing.

The stock payment will be a boon for the fire victims if the company fares as well as it did after it ended a three-year stint in bankruptcy protection in April 2004. The company’s stock soared from about $29 to a high of $71.57 in September 2017, just before a massive fire signaled PG&E could face huge financial headaches for years.

The fire risks underlying the utility’s current trip through bankruptcy make this one much different than the first one, which was caused by a botched attempt at electricity deregulation. As a result, Pacific Gas and Electric is likely to face a bumpier ride out of bankruptcy, making it more likely its stock may swing more wildly too.

“There is nothing in this settlement that solves the problem that PG&E is still going to be running a really risky business,” Ellias said.