China and the US have achieved progress in the implementation of their phase one trade deal, despite "lags" in certain imports that fell slightly behind schedule due to technical and supply issues on the US side on heels of the latter's coronavirus outbreak. 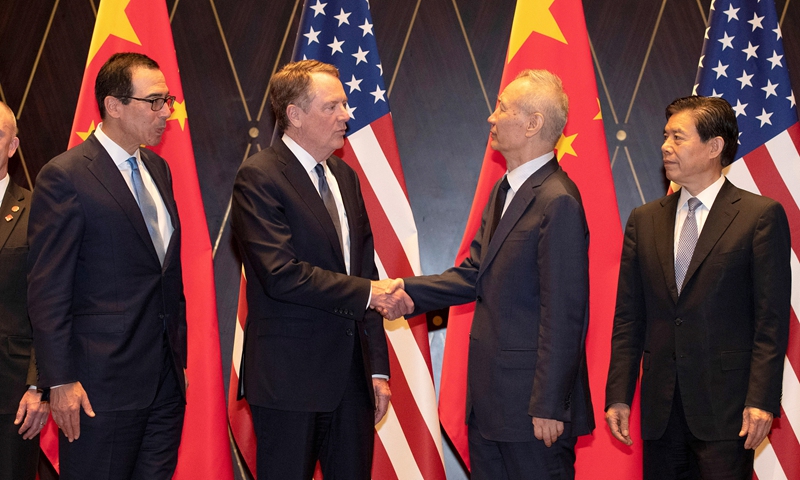 Chinese Vice Premier Liu He shakes hands with US Trade Representative Robert Lighthizer before a photo session after a round of trade talks in Shanghai on July 31 in 2019. (Photo: VCG)

US Chamber of Commerce and over 40 trade associations urged top Chinese and US officials including Chinese Vice Premier Liu He, US Treasury Secretary Steven Mnuchin and US Trade Representative Robert Lighthizer to redouble efforts to implement the phase one trade agreement, according to media reports.

In a letter, the groups urged a significant increase in China's purchases of US goods and services, noting that combating the coronavirus pandemic and restoring global growth partially depend upon the successful implementation of the trade deal, Reuters reported.

Industry insiders have expressed concerns over whether the US has the ability to ship agricultural products in quantity that are also in line with strict quarantine and epidemic prevention measures adopted by Chinese customs.

In late June, China's customs administration announced that it had suspended imports of poultry products from a plant owned by US-based meat processing giant Tyson over a cluster of COVID-19 cases there.

Chinese customs also announced on Tuesday that it has updated the list of US companies that are allowed to export beef to China and the new rule took effect on July 3.

Gao Lingyun, an expert at the Chinese Academy of Social Sciences in Beijing, told the Global Times Tuesday that China's imports of certain US products, such as energy products, have been slightly "off" quarterly targets as barriers in transportation persist.

Data compiled by news website marketwatch.com shows that as of May, China's energy purchases are running at 18 percent of the annual target. The US exports data shows that China has purchased $2 billion in energy products from the US as of May, according to a report by industry website hellenicshippingnews.com.

Analysts stressed that China has the capacity and determination to fulfill the trade deal as it can speed up the process in the second half of the year. "The main difficulties in implementing the deal still lie with the US side," Gao noted.

Under the phase one trade deal signed in January, Beijing pledged to buy at least $200 billion in additional US goods and services over two years, while Washington agreed to roll back tariffs on Chinese goods in stages.

Amid a troubled China-US relationship on the heels of Washington's intervention in China's domestic affairs over the implementation of the National Security Law for Hong Kong, Gao suggested the US not to make further wrongdoings that may set back bilateral trade relations.

Reuters cited White House chief of staff Mark Meadows as saying Monday that US President Donald Trump is considering several executive orders, and some will be targeting China. Meadows did not offer details.

Last week, the US House of Representatives passed a bill that aims to sanction banks doing business with Chinese officials. The US also announced that it has already begun eliminating Hong Kong's special trade status, halting defense exports and restricting the special administrative region's access to high tech products.

"As political tensions between Beijing and Washington ramps up, some Chinese private companies could also adopt a wait-and-see attitude, voluntarily delaying US imports and seek other alternatives," Gao noted.

Huo Jianguo, vice chairman of the China Society for World Trade Organization Studies, told the Global Times on Tuesday that the 40 American trade associations' letter also sends an implicit message that the US wants China to expand imports from the US to provide a boost to flattening US economy.