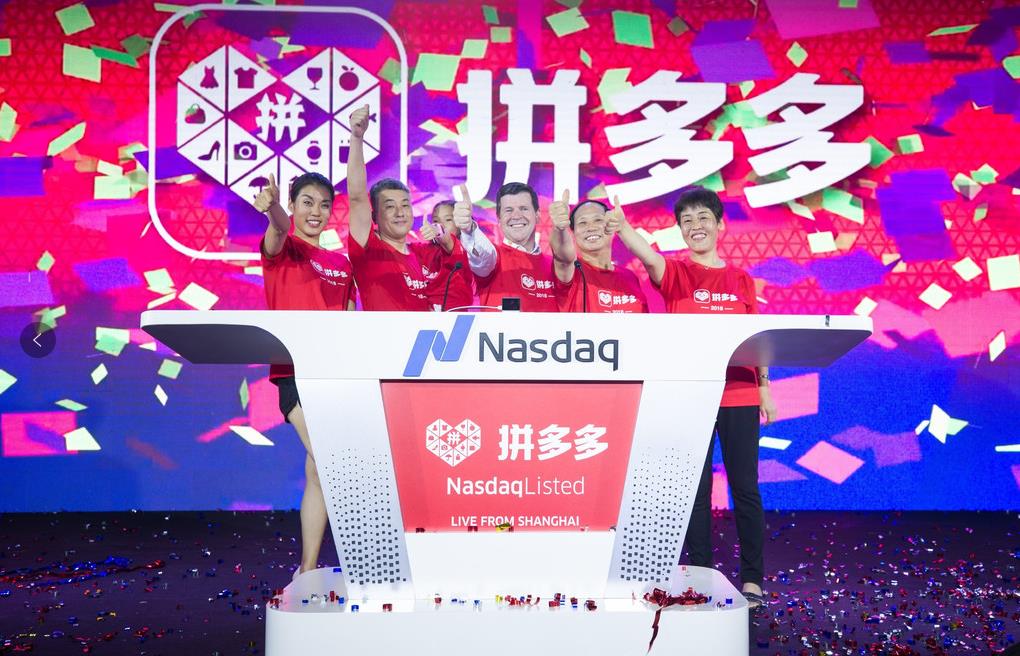 Pinduoduo users attended the company's stock trading debut on the Nasdaq in a Shanghai ceremony on Thursday. (Photo: IC)

Pinduoduo priced its IPO at $19 per American depositary share (ADS) to raise as much as $1.87 billion. Its total market cap of Pinduoduo is $24 billion.

Founded in Shanghai in 2015, Pinduoduo has gathered more than 300 million users and over one million sellers in less than three years. It established a new shopping model and became a representative of new e-commerce. Pinduoduo’s listing has set a new record for the fastest listing of Chinese internet companies. It took only 2 years and 11 months from its founded founding in September 2015 to debuting on NASDAQ.

Pinduoduo has become the third-largest e-commerce company in terms of active users after e-commerce giants Alibaba Group Holding and JD.com Inc, according to media reports.

The bell ceremony was held in New York and Shanghai simultaneously, proposed by NASDAQ, which is the first in NASDAQ’s history.

Pinduoduo invited six consumers to ring the bell in both places. For the first time, separate non-business related people completed the listing bell ceremony, which was the first in the history of NASDAQ and Chinese companies.

“In order to reflect the core mission of always creating value for consumers, we choose to ring the listing bell in this special way. The six consumers who ring the bell represent all the hundreds of millions of families and more than 300 million consumers who care and support Pinduoduo”, said Huang Zheng, founder and CEO of Pinduoduo during the listing ceremony in Shanghai.

On the evening of the July 26, Huang Zheng appeared at the press conference in Shanghai where Pinduoduo was listed. He invited a large number of consumers to participate in the bell ceremony in New York and Shanghai. At the scene, Huang Zheng thanked all the users, investors and employees of Pinduoduo.

“Being listed is only the beginning, there are more challenges in the future, and Pinduoduo needs to continue making an effort”, said Huang Zheng.