Plan to make Shenzhen a ‘model’ city also an answer to US trade aggression, HK situation 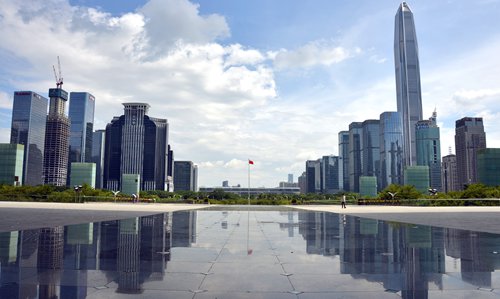 Four decades ago, a small fishing village started groundbreaking reform and opening-up policies that changed the fate of China. Today, Shenzhen in South China's Guangdong Province is a technology powerhouse that's being asked once again to lead the country into a new era of high-quality growth.

But beyond its long-term significance for the country's future, Shenzhen has also become a key ground for China to tackle tricky issues from a seemingly never-ending trade and technological battle with the US to chaos in the Hong Kong Special Administrative Region (HKSAR) that's increasingly detrimental to the HKSAR's future.

So it was fitting when the central government on Sunday released a master plan that aims to build Shenzhen into a "model city" for the country with global competiveness in a wide range of areas from technological innovation to financial services to the legal system to the environment. To achieve this goal, the plan promised to carry out in Shenzhen reforms and opening-up measures that have never been tested elsewhere in the country.

"In a way, you can say that this plan is an answer to the current challenges," said Gao Lingyun, an expert at the Chinese Academy of Social Sciences in Beijing, though he stressed that the plan - long in the making - serves a much bigger and longer-term purpose.

Gao, who is familiar with the process of the plan, said that the plan could also prepare the country in the long run to deal with an increasingly aggressive US and help boost the Hong Kong's economy to address social issues.

Shenzhen is at the forefront of the China-US trade and technology war. Many Chinese technology companies targeted by the US crackdown, including telecom enterprises Huawei Technologies and ZTE Corp and dronemaker DJI, are based in the city. Electronics and other products produced in Shenzhen have also been hit by the US protectionist policies.

Seemingly doubling down its crackdown on Huawei, the US on Monday added 46 additional organizations affiliated with the company to its Entity List, even as it granted another 90-day reprieve for Huawei in wake of domestic pressure.

Though the company on Monday responded by harshly criticizing the move and saying the US decision will have no substantial impact on its business, CEO Ren Zhengfei acknowledged the difficulties the company faces. In a speech posted on Monday, Ren said that Huawei is in "a life and death" situation and called for reforms and other remedial measures.

Huawei's situation reflects a challenge for the whole country, as the US appears determined to contain China's rise in crucial technologies of the future from 5G to artificial intelligence to biotech.

But the Shenzhen plan offered a direct response, as it calls for enhanced research and development in those areas, better protection of intellectual property rights and attraction of global companies and talent.

"While it is unlikely to be a direct response to the trade war, it has everything to do with what we fight for in the war: China's own development," said Huo Jianguo, a vice chairman of the China Society for World Trade Organization Studies. "The most important thing is that we don't change our focus on development just because of the trade war. The plan is proof that we are on the right track."

While many are still assessing the plan and its meaning, the reaction in the technology sector not only in Shenzhen but in surrounding cities has been "very positive," Chen Liang, a business owner in the neighoboring manufacturing hub of Dongguan, told the Global Times on Tuesday.

"Many companies have been affected by the US trade war and the mood here has been low, so this offers much-needed guidance and a confidence boost," said Chen, who is well-connected in the area.

The plan to boost Shenzhen, which is in close proximity to Hong Kong, could also offer opportunities for the SAR, whose economic prospects have been severely dimmed by recent riots and chaos. The Hong Kong economy is already facing recessionary pressure and officials have warned of further deterioration.

Though the central government has taken a hands-off approach to the situation in Hong Kong, it continues to include the HKSAR in major national economic development plans such as the Guangdong-Hong Kong-Macao Greater Bay Area plan, in an apparent bid to ensure long-term prosperity in the city. The plan for Shenzhen, contrary to speculation that it aims to replace Hong Kong, also called for further integrated development.

"The situation in Hong Kong is very complicated but ensuring economic growth will definitely help address some of the issues," Gao said. "I think that's also a consideration for the plan."

At a news conference on Tuesday, Hong Kong Chief Executive Carrie Lam suggested that the Shenzhen plan brings opportunities rather than competition (to Hong Kong). Given the close cooperation between the two cities, if Shenzhen becomes a model city, "there will definitely be some benefits for Hong Kong," Lam said.